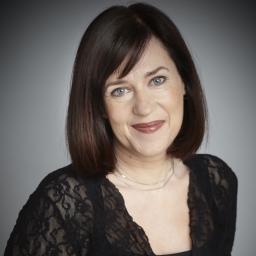 Sophie is the award-winning author of a range of teen thrillers, including the Missing series (Girl, Missing, Sister, Missing and Missing Me), Blood Ties and Blood Ransom and the Medusa Project series. She has also written two romance series: the Luke and Eve books and the Flynn series, which starts with the novel Falling Fast. Split Second is her first teen stand-alone novel in seven years.

Sophie's first novel for adults is the psychological thriller Close My Eyes.

You can see Sophie giving her writing tips in a video - click here.

August 2021 Book of the Month | What a diamond of a thriller this is - a genuine page-turner that snakes with twists readers genuinely won’t see coming. Who to trust? Who to believe? Sophie McKenzie has struck gold with her latest page-turner.   Fourteen-year-old Cat is having a hard time of it, to put it mildly. She’s lost her father, her little sister doesn’t speak, and her mum, a former TV astrology celebrity, is more interested in her work than anything Cat says or does. But after receiving a bolt-from-the-blue text alleging that her dad is alive, Cat throws herself into trying to tracking him down, with the help of a newfound friend, handsome Tyler, the first person she’s been able to open up to for an absolute age.   A search for a dad becomes a search for a priceless diamond, which in turn becomes a search for the truth - and then a struggle to understand that truth. Driven by Cat’s endearingly determined, courageous personality, this read-in-one-sitting thriller has family and friendship bonds at its fast-beating heart.   Find out more about Hide and Secrets as we chat with Sophie McKenzie, our Author of the Month.

Sophie McKenzie’s sure touch is brilliantly on display in this thrilling new adventure about her four teenagers transformed by the Medusa gene. This time the four, all of whom have special mind powers, are in serious danger; their mentor has betrayed them and they are on the run. But, trying to keep one step ahead of the one person in the world who knows all about you is no easy feat. Can the four stay safe or is their cover blown just when it seems there are more Medusa teenagers in other parts of the world ?

Fourteen years ago, scientist William Fox implanted four babies with the Medusa gene - a gene for psychic abilities. Fox's experiment left a legacy: four teenagers, each with their own distinct and special skill. These four teens were originally brought together to form crime-fighting force, The Medusa Project. Now the team is due to be disbanded and the teenagers sent to separate locations. But Nico, Ketty, Ed and Dylan are determined to investigate claims that a drug conveying the same powers as the Medusa gene has been developed. Joined by new friends Cal and Amy, who also have the gene, the four set off on their most dangerous mission yet...

The fourth in this hi-octane series featuring four teenagers, each of whom have different psychic powers, who together can defeat almost anything. One of them Dylan has her hands chock full as she tries to discover the truth behind his father's death, the scientist who created the medusa gene that gives these children their powers. It's a roller coaster ride.

The Medusa Project: The Rescue

This is the third in this hi-octane thriller featuring four teenagers, each of whom have different psychic powers, which together can defeat almost anything. The problem is that government agents want them to help to infiltrate the criminal underworld but of course the criminal world also want them to help fulfil their crimes. As with the first two this one is relatively short and a real page-turning read.

The Medusa Project: The Hostage

A breathtaking, headlong thriller that grips from the very first moment - this sequel to The Set-Up tells how Nico, Ketty, Ed and Dylan, recent recruits into the undercover crime-fighting force called The Medusa Project, tackle their next major mission. This time Ketty has to make decisions on her own if she is to save her brother but to do so she must keep her special psychic powers undercover or she’ll risk the safety of the rest of the group.

The Medusa Project: The Set-Up

This is not science fiction. Within the lifetime of children now the human race will have created new improved humans through genetic manipulation. Frightening but true. Here in the first of a thrilling roller-coaster adventure series you can join four teenagers, each of whom of individual psychic abilities. It's powerful, page-turning writing from the Richard and Judy award-winning author Sophie McKenzie.

Best-selling teen author Sophie McKenzie hooks readers straight into this action-packed and page-turning story. A sequel to Girl, Missing and Sister, Missing this also works well on its own as Madison, shocked by news about her father, tracks down her ‘real’ father and finds herself caught up in a sleezy world of missing girls, babies and secret hideouts. Madison takes terrifying risks as she bravely searches out the truth.

Bestselling Sophie Mackenzie follows up Girl, Missing with a nail-bitingly tense and action-packed thriller as Lauren, still reeling from her own kidnapping, loses her little sister Madison in the blink of an eye on a crowded beach. Surely this can’t be happening again? What does the kidnapper want? Following instructions, Lauren’s determination to save Maddy at all costs leads her to uncover some dark secrets in a story that doesn’t disappoint.

Following the four March sisters for a year, and narrated by candid, clumsy Jo, the story begins at a time of great upheaval for the March family. Dad is working away as a humanist minister in war-torn Syria, Mum has recently lost her job as a social worker and, consequently, they’ve had to move house. Sensitive, shy Beth just wants “Daddy to come home”. Fashion mad Meg is frustrated by not being able to buy new clothes, while trying to figure out what to do with her future. Sharp-tongued, artistic Amy constantly bickers with Jo, who’s doggedly determined to become a novelist. Despite their own troubles, the family volunteer at a centre for Middle Eastern refugees on Christmas Day. It’s here Jo meets Lateef, a refugee who’s been adopted by a wealthy lawyer, and she immediately senses that he’s “going to be my best friend in the whole world”. In fact, he becomes close to the entire family as they ride a rollercoaster of worries and coming-of-age revelations alongside a whole lot of love and friendship. Written in a highly accessible style, this affectionate update re-maps the personalities, aspirations and uncertainties of the original March sisters to create a new landscape of their lives, one that’s suffused in the spirit of the original and a contemporary freshness as it explores the timeless themes of sibling strains and solidarity, and feeling a sense of home.

In a Nutshell: Super-readable cyberbully themed whodunit | “Friendship matters. Right? Being loyal. Being honest. Being there”. Of course, but how does it feel to be accused of betraying your best friend in the entire world? That’s exactly what happens to Carey, the likeable, girl-next-door lead in this tense teen pageturner.   The nightmare begins when Carey’s bestie, Amelia, is trolled by a Nattersnap app user who goes by the name of Sweetfreak. When the bullying escalates and Amelia receives a death threat, the police trace it back to Carey’s laptop, and her life unravels in an instant. While the pain of Carey’s ostracised existence is powerfully portrayed, she refuses to succumb to the sense of helplessness, and determines to discover Sweetfreak’s true identity. The many twists and turns of this highly readable, riveting whodunit will keep readers guessing to the final pages, and the novel’s of-the-moment relevance packs a powerful punch.

This is a gripping thriller, inspired by the real-life case of a toddler who went missing in the early ‘90s. Touching on areas such as difficult relationships with parents, kidnapping and adoption, along with a compelling and high-speed plot, romance, wit and a great deal of suspense, readers of 11+ will find this utterly compulsive.  It is also heart-breaking and will have you gripped to the page because the characters are so real.