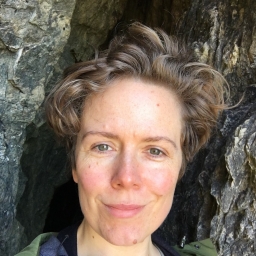 She lives in London with her wife Karen, her dog Buffy, and a creepy puppet that is probably cursed.

Loki: A Bad God's Guide to Taking the Blame

August 2022 Book of the Month | Laugh out loud at this completely hilarious follow up to the magnificent Loki: A Bad God’s Guide To Being Good. Loki is back for a new adventure. Now he is trying to work out how to clear his name having been unfairly charged with stealing the great god Thor’s hammer. Once again Loki brings his trademark confusion and chaos as he shifts effortlessly between his mortal and immortal personalities in an effort to have the very best life he can. Told equally in words and pictures, this is just ridiculously joyful from start to finish.

Loki: A Bad God's Guide to Being Good

Shot-through with wit, myth, friendship and fart jokes, and told through a blend of narrative text, doodles and comic strips, Louie Stowell’s Loki: A Bad God's Guide to Being Good is a riot from start to finish. Oh, how the mighty are fallen! After playing one joke too many, trickster god Loki has been banished to earth by Odin, and this book presents Loki’s diary account of his 31-day exile as a mere mortal. The interlocking of words and pictures is hilariously effective from the off, such as when the author juxtaposes Loki’s “before and after” form. Before he had “awesome big hair”, “cool facial hair”, “broad shoulders” and “arm muscles”. As an eleven-year-old boy his hair is “only slightly awesome”, and his body is decidedly scrawny. Despite believing “I am too awesome to be treated like this!”, Loki reluctantly admits that “Odin IS the boss of me”, which leaves him no choice. If he wants to return to his god-form, he must do good deeds, go to school, and show some kind of progress. Alongside the fast-paced execution of an excellent concept, this heady hotpot of humour has been superbly designed. I loved the droll correction boxes flagging-up Loki’s fibs. As he explains, “this is a magical diary. If I lie in here, the diary will correct it”. And there are comic corrections aplenty as Loki strives to increase his “virtue scores” to end his banishment. The first in a series, Loki: A Bad God's Guide to Being Good is sure to generate tonnes of “have you read this?” enthusiasm in the playground.

Otherland is a dangerous magical underworld - a place where appearances can be deceiving and anything can happen. A world of gods, vampires, and fairies. It's also... horrible. When life-long friends Myra and Rohan discover that Rohan's baby sister Shilpa has been stolen and taken to Otherland, the only way to rescue her is by taking part in a deadly game - three impossible challenges set by the Fairy Queen of Otherland. Win the game, and Rohan and Myra can go home with Shilpa - but lose, and they'll be trapped in Otherland forever... A darkly funny, action-packed fantasy adventure, perfect for fans of The Strangeworlds Travel Agency, Malamander, and The Land of Roar, from the author of the highly-acclaimed Dragon in the Library series.

The Dragon in the Library

As book-loving children know, all the best stories start in the library and that’s certainly the case here. Kit would rather be looking for wildlife in her local cemetery but her friends make her take a detour via the library where she discovers some amazing things: a librarian who’s also a wizard, a dragon sleeping in the basement, and her own magical powers. All these things are put to good use to stop a wicked landowner, whose plans to turn the library into a carpark are actually cover for something even more despicable. This will be great fun for children who like stories overflowing with magic, and Kit and her friends are very appealing characters.

This extremely user-friendly and accessible guide book will teach children the basics of Python, enabling them to create their own games and simple animations. Now that computers and coding are compulsory school topics in the UK it will prove very useful. Step by step instructions take children through the basics and it’s cleverly and clearly laid out on colour pages filled with diagrams and tip boxes. Key ideas about coding in general are also included. Ring binding means that it opens flat on the desk or can be propped up open next to the computer screen. A really well thought-out and effective information book. ~ Andrea Reece You might also be interested in Coding for Beginners using Scratch and Lift-the-Flaps Computers and Coding-  a fun and essential introduction to what can be sometimes still seen as an intimidating subject. ***There is special activity pack with ideas to celebrate Science Week to download here! British Science Week is 10–19 March - find out more at www.britishscienceweek.org

The internet is full of amazing possibilities but, just like the real world, there are a lot of potential dangers and difficulties too. You need to know what to watch out for and how to protect yourself. Whether you're worried about oversharing on social media or coming across dangerous people, this guide gives you tips and tools to take control and stay safe online.

One of our Books of the Year 2015 | Cartoon-like illustrations fill this book which is packed  with information about all things to do with space from machinery to suits to simple explanations of physics. Tricia Adams   This book, with a Foreword by Tim Peake who in December 2015 became the first British astronaut to go to the International Space station, should go to the top of any must-have list for young children interested in space travel. It’s packed with fascinating information on everything from what to study to help you become an astronaut, to the special training astronauts undergo, rocket science and how shuttles get into space, and what it’s like to live on the International Space Station.  Of course it explains how astronauts go to the loo, but the sections on what happens to human stomachs in space is just as icky and interesting! The information is very well presented, and despite the conversational tone there’s no talking down. After all, the children reading this book could become fully fledged astronauts in the 2030s. Inspiring stuff!

A humorous re-telling of the legendary tale, specially written for children who are starting to read on their own. Easy-to-read text and colourful illustrations bring the story of a fire-breathing dragon, a princess in peril and a bold knight to life. Includes background to the legend and the art it has inspired, as well as internet links to find out more. Developed in consultation with reading experts at Roehampton University to help young readers grow in confidence and ability. Part of the Usborne Reading Programme, comprising over 250 titles.

Short and simple text on each spread combines with some eye-catching and enchanting illustrations for parents to reveal the story of christmas to young children everywhere. It's the perfect present for a child's first Christmas, which will be treasured, read and re-read throughout their toddlerhood and as they become newly independent readers too.