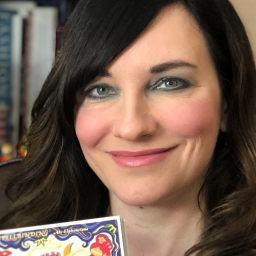 Michelle Harrison is a full time author who lives in Essex. Her first novel, The Thirteen Treasures, won the Waterstones Children's Book Prize and is published in sixteen countries including the UK. It was followed by The Thirteen Curses and The Thirteen Secrets. Michelle has since written Unrest,  a ghost story for older readers and One Wish, a prequel to the Thirteen Treasures books. The Other Alice is her sixth novel.

Michelle's path to becoming a writer was inspired by stories told by her sisters as she was growing up, one of which was so vivid it prompted her to dig in the garden looking for evidence of a dead fairy. (She didn't find anything.) Since becoming a published author she still does strange things like asking people to shut her in the boots of their cars – all in the name of research, of course – like Alice.

Michelle has a son called Jack and two black cats. She suspects one of them is a mischief, but hasn't caught her drinking tea . . . yet.

Q. How would you describe your life in only 8 words?
A. I'm a 'glass half-full' type of person.

Q. If you could be anywhere in the world right now, where would you choose to be?
A. Elvesden Manor.

Q. What’s your best quality?
A. Optimism, or at least I like to think it is!

Q. If you could be any person or thing, who or what would it be?
A. I sometimes think I'd like to be a cat, just for the sheer amount of sleeping they do.

Q. What trait is most noticeable about you?
A. My Essex accent.

Q. Who is your favourite fictional villain?
A. Beatrice Lacey in Wideacre by Philippa Gregory.

Q. If you could meet any historical character, who would it be and what would you say to him or her?
A. It would be Jack the Ripper. I like to think I'd demand to know his identity, but in all honesty I'd probably run.

Q. What is your biggest pet peeve?
A. People who look down their noses at others.

Q. What is your favourite occupation, when you’re not writing?
A. It depends on my mood, but drawing/painting, reading or watching a film.

Q. What’s your fantasy profession?
A. Being an author and an illustrator!

Q. What 3 personal qualities are most important to you?
A. Loyalty, a sense of humour, and integrity.

On Books and Writing

Q. Do you have one sentence of advice for new writers?

A. Read lots, write lots, and don't give up.