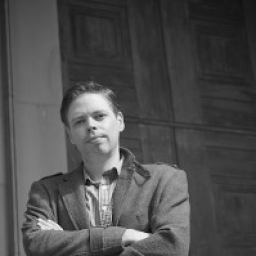 William Hussey is an award-winning author of books for children and Young Adults. As a gay man and a visiting author, he has spoken to hundreds of LGBTQ+ students worldwide. Hearing their stories of modern intolerance, prejudice and the tragic consequences this has can lead to, inspired him to write Hideous Beauty.

Gabriel is a natural born rule-breaker. And his biggest crime of all? Being gay. Gabriel knows his sexuality must be kept secret from all but his closest friends, not only to protect himself, but to protect his boyfriend. Because Eric isn't just the boy who has stolen Gabriel's heart. He's the son of the chief inspector at Degenerate Investigations - the man who poses the single biggest threat to Gabriel's life. And the Protectorate are experts at exposing secrets.

Exploring the all-consuming throes of love, malicious secondary school social politics, sexual abuse, and how difficult coming out can be, William Hussey’s Hideous Beauty is a top-notch YA thriller with hard-hitting emotional resonance. Forced by social media exposure to come out earlier than planned, Dylan and his gregarious boyfriend Ellis reveal their relationship to the world in spectacular style at a school dance: “Okay, Dylan, this is it. No going back. The closet door is firmly barred behind you, chained and bolted. No re-entry, no refunds. It’s gay all the way from here on out.” Riding high after an unexpectedly jubilant response to their revelation, tragedy strikes when they leave the party - Ellis becomes angry and their car plunges into a lake. While Dylan is rescued, Ellis drowns, leaving Dylan wracked with grief and guilt: “I deserve the pain. I deserve the crazy. I deserve a messed-up hand. No one’s taking these things away from me.” Set on trying to “find out who pulled me out of that car and why they left Ellis to drown”, it’s not long before Dylan stomps into a viper’s nest, uncovering jaw-dropping truths that set him - and readers – reeling. With his family less than supportive, at least best friend Mike remains at Dylan’s side, even though he’s undergoing chemotherapy for leukaemia.   Gripping, moving and unflinchingly honest, this is a fiercely affecting novel, told through the cleverly interwoven collision of two timelines.

This finale in the Witchfinder series is eagerly awaited and the series itself has been universally acknowledged by both authors and reviewers as something special.  The fear unleashed by the author throughout the trilogy is breathtaking but not to be missed.  The Age of Man is over. Vampires stalk the streets. Dark creatures wait to be unleashed. The Demontide is here. The Last Nightfall is the final, thrilling instalment of the Witchfinder trilogy.

Horror stalks this scary second adventure for Jake who must now lead the war against the Demon Father, newly escaped from hell. Jake’s previous success in closing the demon door shows his prowess but has he the courage to go back into the past and change the course of history? Jake is a great hero and his world is a grimly ghastly one. This is the sequel to Witchfinder: Dawn of the Demontide. A 'piece of passion' from the editor of the Witchfinder series The Witchfinder series was my first acquisition for the Oxford University Press children's list and from the first page I was hooked. I knew that I had to be the one to bring this book to the world.  I urge you to read both the first one and this one and find out for yourselves. With its mix of magic and science, horror and beautiful writing, it is quite unlike anything I’ve ever read and I envy you your first foray into the world of Witchfinder...

Dawn of the Demontide (Witchfinder series)

Cleverly crafted, this is a masterful horror story that will chill readers to the bone as Jake Harker comes face to face with the evil forces of old witchcraft and its links to Matthew Hopkins, the evil Witchfinder of the sixteenth century. It seems that Jake alone must stand firm against the dark forces of the Demontide but he may not have the power to keep it at bay. A 'piece of passion' from the editor of Witchfinder: Dawn of the Demontide: Witchfinder: Dawn of the Demontide was my first acquisition for the Oxford University Press children's list and from the first page I was hooked. I knew that I had to be the one to bring this book to the world — even if it meant dabbling in the dark art of breakneck speed publishing ! Luckily the author William Hussey and the team at OUP were up for a bit of ‘Are we crazy - can we really publish a book this quickly?’ and although we only acquired the book in July 2009, Dawn of the Demontide will be in the shops from March 4th – at least a year ahead of a ‘normal’ schedule. So why the crazy rush? Well, I’d urge you to read it and find out for yourselves. With its mix of magic and science, horror and beautiful writing, it is quite unlike anything I’ve ever read and I envy you your first foray into the world of Witchfinder... Jasmine Richards, Senior Commissioning Editor, Oxford Children’s Books