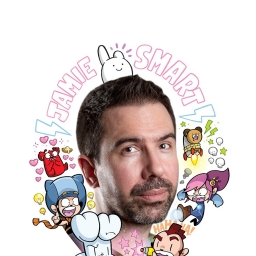 Jamie Smart has been creating children's comics for many years, with popular titles including Bunny vs Monkey, Looshkin, and Fish-Head Steve, which became the first work of its sort to be shortlisted for the Roald Dahl Funny Prize. He also works on multimedia projects like Find Chaffy.

Jamie lives in the south-east of England, where he spends his time thinking up stories and getting lost on dog walks.

Bunny vs Monkey and the League of Doom!

July 2021 Book of the Month | Readers of the Phoenix Comic love Jamie Smart’s Bunny vs Monkey adventures, and no wonder. They are totally brilliant, inventive, original and hilarious comic strips. If you’re not in the know, the chief characters are Bunny and his gang Squirrel, Pip and Skunky, and their adversary, causer of mayhem, Monkey. From the opening wintery story, “Gross!” in which Monkey uses smelly mud on a stick to try and advance his plans for world domination, the pace is frenetic, silly and very funny.  Story titles such as “The Embiggening!”, “The Destroy-O-Torium” and “Monkey with a Flame Thrower” give you an idea of what else is in store. It’s a comic comic extravaganza and as an added treat, Smart shows readers how to draw Action Beaver and Le Fox. Irresistible!

Bunny vs Monkey: The Human Invasion

Jamie Smart’s Bunny vs Monkey adventures have been a highlight of the superb Phoenix Comic since it started, but you can now enjoy a year’s worth of stories in in this chunky-but-pocket-fitting paperback. As ever, many of the episodes pit Bunny against evil, would-be-tyrant Monkey but the arrival in their word of huuuumans brings more opportunities for chaos and explosions, e.g. in the story called The Kakapo Poo Kaboom! Smart is a comics genius and every one of these strip adventures is full of characters readers will love and packed with gleeful absurdities. No wonder the stories are so popular, there’s nothing like them and hardly anything that comes even near their levels of frenetic fun.

You might know Bunny vs Monkey from the totally brilliant Phoenix Comic. This new book brings together a collection of their comic adventures in one chunky but portable, full colour (obviously) paperback – how great is that! If you are new to the duo, Bunny lives in a peaceful forest with his nice (but dim) friends, Weenie the Squirrel and Pig. Other than the occasional run in with a bear, all is calm until the arrival of Monkey, hell-bent on world domination. (In Monkey’s defence, he was launched into space by scientists with that aim, but the mission failed and he fell back to earth just over the hill from their laboratory). He’s helped in his scheming by a skunk with its own underground laboratory and the two cause no end of trouble for Bunny. With titles like Wrestlepocalypse, Fish Off and The Whuppabaloo, these mini adventures are hugely inventive, wonderfully daft and always very, very funny.  Bunny vs Monkey would tempt the most reluctant reader - you can find more books we think are suitable for Relucant Readers here.

The Phoenix Presents | Recommended by Stephen L Holland, Guest Editor, June 2021: Looshkin by Jamie Smart stars a manic blue cat terrorizing its family household, their neighbours, their elderly relatives and any odd-ball expert foolish enough to step through their doors. Utterly oblivious and determinedly in denial, Looshkin refuses to take responsibility or any notice of what you or I would call reality. You will cry with laughter. Recommend you moderate your sugar intake first.

7+. Jamie Smart's cute, fluffy and navigationally challenged creation, Chaffy is back but lost again like never before, looking for his long lost Chaffy friends.  This time Chaffy has strayed so far that he's fallen off the map altogether and into the weird and wonderful world of Fantastico Island.  Can you find him amongst all the strange creatures including the Bipples, Skellingtons, Schnoodges and Glumbos he meets along the way?  And can you help reunite him with some of his long-lost friends and bring them home again to safety? In addition, there's a page of Chaffy stickers in lots of different poses plus if you'd like to give a Chaffy a home then in the book you'll find how you can go about it.

Join in the search for the missing Chaffies! Ten loveable Chaffies have wandered off into the world and someone needs to set out and find where they are hiding! Join in the search for these delightful creatures among a graveyard of scaredy ghosts, some very, very hungry pigs and the dangerous land of the stompy dinosaurs.  There’s lots of looking to do in this attractive and busy picture book.  It’s definitely a book to return to time and time again and parent and child together will become thoroughly hooked.