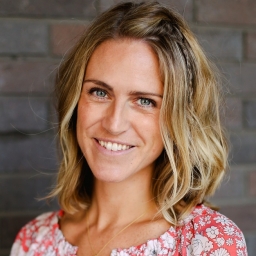 Abi Elphinstone grew up in Scotland where she spent most of her childhood building dens, hiding in tree houses and running wild across highland glens. After being coaxed out of her tree house, she studied English at Bristol University and then worked as a teacher in Africa, Berkshire and London. She is the author of The Dreamsnatcher, The Shadow Keeper and The Night Spinner; a series of fast-paced adventure books for 8-12 year olds which follow Moll, Sid, Alfie and a wildcat, Gryff, as they search for the Amulets of Truth to stop a group of sinister witchdoctors taking over their world. She is also the curator of the anthology Winter Magic.

Her 2018 book Sky Song was a snow-swept tale of adventure and friendship. The book was a Waterstones Book of the Month and was also shortlisted for the Independent Bookshop Week Book Award and the Sainsbury Children’s Book Award for Fiction as well as being longlisted for the Blue Peter Book Award and nominated for the Carnegie Medal. The Times has praised Abi has ‘a worthy successor to CS Lewis’ and The Guardian described Sky Song as ‘a truly magical tale’.

Abi’s new series The Unmapped Chronicles is an epic and wide-reaching new series of interlinked standalone novels about magical kingdoms which coexist alongside our continents and hold all the magic needed to conjure sunlight, snow, rain and every untold wonder behind the weather for them. Abi has a World Book Day book, Everdark, coming out in March 2019. Everdark is a prequel to The Unmapped Chronicles. The first book in her new series, Rumblestar, is out in May 2019 and Abi has her first picture book, The Snow Dragon, with illustrator Fiona Woodcock coming out in October 2019.

Abi volunteers for Beanstalk charity, is a patron for the brilliant Grimm & Co and is heavily involved in campaigning for Authors4Oceans. When she's not writing, Abi enjoys speaking in schools and travels the world looking for her next story. Her latest adventures include living with the Kazakh Eagle Hunters in Mongolia and dog-sledging across the Arctic.

This new episode in The Unmapped Chronicles series plunges readers head-first into heart-stopping adventure deep in a rain forest closely modelled on the Amazon, but thrillingly, magically different. Twins Fox and Fibber Petty-Squabble (fabulous names are one of the hallmarks of Elphinstone’s writing) find themselves in Jungledrop, one of the Unmapped Kingdoms, and in a vital race against time with the thoroughly villainous harpy Morg; for the first time in their eleven years, the two siblings will have to work together if they’re going to secure the future of two worlds. This is a hugely satisfying fantasy adventure filled with everything that makes the hearts of young readers sing.   Readers who enjoy Jungledrop should look out for Jessica Townsend’s Nevermoor series or Dominique Valente’s sparkling Starfell books.

November 2019 Book of the Month | Not since The Snowman have readers been taken on such a magical, snowy journey of love and adventure. Phoebe lives in a gloomy orphanage run by the cruel Griselda Bone. The two clash frequently, and often over Phoebe’s creative response to her school work: Griselda does not approve of words like ‘whispery’ and ‘flumping’. Locked up in the snow overnight, Phoebe and her little dog Herb are surprised by a huge and magical snow dragon, who takes them on an extraordinary ride through the skies. Filled with snowflakes, starlight and revelling in the power of the imagination this is a gorgeous story for Christmas nights and Fiona Woodcock’s illustrations are very special indeed.

As proved in her hugely popular Dreamsnatcher series, Abi Elphinstone understands exactly what young readers want in the way of magical adventure and Rumblestar, the first instalment of a new series, should make them very happy indeed. The new Unmapped Chronicles start with a ‘what if’ - specifically what if our climate was actually created magically in another world linked to ours? When Casper Tock finds himself in just such a world, all he wants is to escape but it’s his destiny to stand against the villainous Morg to safeguard his home. In this he has a wonderfully spiky companion, a girl called Utterly Thankless, and a whole host of dangers to confront. The adventures keep coming and Elphinstone’s imagination seems boundless while she’s clearly thinking too about the climate challenges we face in the real world. Great stuff, and a real treat for young readers.

January 2018 Book of the Month  This story was absolutely entrancing. As soon as I began reading I was swept away on a journey filled with dangerous enemies and monsters but of finding new friends, hope and a sense of belonging.  Open up the pages  and you too will be taken on a wonderful adventure filled with Ice Queens, Eagles, Erkenbears, inventors and magic.  Filled with wonderful characters and stunning settings, Abi immediately transports her reader effortlessly to the harsh, wild landscape of Erkenwald where an evil Ice Queen is gradually stealing voices. A Queen intent on driving division between tribes, dissolving all trust and compassion until all are pitted against each other.  The Ice Queen has imprisoned Eska in a cursed Music Box at Winterfang Palace.  In her quest to take full control of Erkenwald the Ice Queen must steal Eska’s voice but in one unguarded moment and a little help from a stranger Eska is able to escape.  Finally free but finding her memories have deserted her, Eska must find out not only where she belongs but also why her voice is so important to the Ice Queen.  With the Queen hunting her and the freedom of Erskenwald at stake Eska must try to convince the tribes to work together again to free all the imprisoned voices and bring an end to the Ice Queen’s rule.  Abi is a gifted storyteller, she creates magic with words and brings to life the world of snow-capped Never Cliffs, Mountain Ghouls, Sky Gods and tribes that must remember how to work together in order to save themselves.  Just wonderful and I believe will confirm Abi's place as one of today's greatest children's authors. ~ Shelley Fallows - You can also find Shelley here. STOP PRESS - Downloadable lesson plans for schools produced by the author, who used to be a teacher, can be found on her website

One of Our Books of the Year 2017 | With this action packed third and final instalment to the series, Abi Elphinstone has secured her place in the imagination of young readers. Dark magic threatens to shroud Moll and everything she holds dear in an eternal night, reducing the world around her to a place without hope. Never has she been further from home or felt more alone, her constant companion self-doubt as she tries to fight back against the last two Shadowmasks. Yet the darkness is hard to fight and it will take every ounce of courage she has to overcome them.  Moll must face her deepest fears whilst she, Siddy and Gryff embark on an adventure that will see them face goblins, witches and giants in the northern wilderness. Can they fight the curse of the Night Spinner and find the Amulet of Truth to bring light back to the land, when so many have already fallen under its spell? Abi Elphinstone is most certainly a writer to watch. You can feel her own sense of adventure and wonder for the world right within the heart of her stories and this is an amazing gift to share with the children who read them. Totally absorbing with just the right level of scary, the fears and feelings within are something that all children will relate to. Through Moll, Gryff and their friends we learn the importance of friendship and learning from your mistakes, whilst being true to who you are and finding courage even in the very darkest of moments. A new adventure is promised from Abi in 2018 but in the meantime this trilogy is certainly one that will be returned to again and again. ~ Shelley Fallows

One of our Books of the Year 2016 | March 2016 Book of the Month Fabulous, feisty Moll returns with the ever faithful and courageous Gryff by her side in their quest to save the old magic and stop the Shadowmasks from destroying them.  This is a tale of friendship, about finding courage in the darkest of moments and the desire to fight and stand up for those you love and what you believe in. Abi Elphinstone has a huge talent for storytelling and the influence of well loved fairy tales and stories is clear to see as she expertly creates a tale filled with adventure, peril, mystery and of course magic. This is a fantastic sequel to The Dreamsnatcher and continues a thrilling series that is sure to capture imaginations and have boys and girls, young and old, reaching for their catapults and quivers.  Absolutely loved it. Do read Abi's debut novel The Dreamsnatcher first, it's fabulous and will have you eager for The Shadow Keeper as soon as you've turned the last page. ~ Shelley Fallows

One of our Books of the Year 2015 - A Staff Pick of the Year 2015 - March 2015 Debut of the Month   Abi Elphinstone’s debut novel plunges the reader into a world of magic and adventure. Twelve-year-old Moll lives in a gypsy camp in the Ancientwood.  She has no parents but the gypsies’ extended family take care of her. There’s something special about Moll - her very best friend is a wildcat, Gryff, and the strange nightmares that plague her seem to prophesy dark and scary battles in the future. This is a wonderful book with all the elements that go to make classic children’s fantasy – a good versus evil battle in which a young child is pitched against a powerful enemy, the band of close friends who will help Moll, a wild forest setting. And a magical wildcat! It’s perfect for fans of Harry Potter, and there are more adventures to come.  ~ Andrea Reece