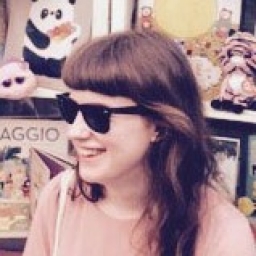 Lucy Letherland is an illustrator based in London. She graduated from Manchester School of Art in 2011 with a First Class BA (Hons) in Illustration with Animation. Lucy’s work is strongly led by humour and narrative, creating a playful graphic quality. She uses a mix of hand-drawn and digital techniques to produce lively illustrations filled with detail. Follow her on Instagram here.

In 2014 Lucy’s first picture book for children, Atlas of Adventures, was published by Wide Eyed Editions. It went on to win the UK Educational Writer’s Award 2015, and was also shortlisted for the Waterstones Children’s Book Prize, The English Association’s 4-11 Picture Book Awards, and the UKLA Book Award 2016. Her next book, Atlas of Animal Adventures won the National Book Tokens Children’s Travel Book of the Year 2016 in the Edward Stanford Travel Writing Awards.

A Q&A with Lucy Letherland :-

Which adventure from ‘Atlas of Adventures: Wonders of the World’ would you most like to go on?  I have always wanted to visit Norway and see The Aurora Borealis! I think they’d be a very magical sight. It was fascinating researching this adventure and looking at all the beautiful shapes the lights make. I’d love to wrap up warm and take a boat tour through the fjords, dodging ice floes and various sea life along the way - all the while being lit by an array of breathtaking swirling colours above. If you look closely at my illustration you might even be able to spot a mini-Lucy out there on the deck, peering up in wonder at the night sky!

Which adventure did you find the hardest to draw?

Although visually this has ended up being one of my favourite spreads from the book, I found The Colosseum very hard to draw! Buildings can be tricky things to illustrate - particularly when there’s so much detail and ancient history in include. The perspective was also quite difficult to get right, being an aerial view. Piecing together such an iconic building took me a long time to perfect (along with the surrounding city of Rome), until finally I was satisfied that the scene would be instantly recognisable to the reader.

What was the starting point on your page for each adventure?

My starting point for every page was always the background. I’d begin by researching each adventure very quickly and intensely – looking at lots of reference images and building up a picture of the place in my mind. Once I had all that information stored in my head I’d piece together a backdrop.

By starting with the background first, it made it easier to decide where I wanted things to be; I could then set about filling in the rest of the scene with lots of buildings, characters and other points of interest. It also helped me to establish where the main action should taking place at the forefront of the scene, and what things could be hidden at the back for readers to discover later on.

How do you draw your illustrations?

I try and get my initial ideas down very quickly and roughly, so my illustrations often start life as just tiny pencil scribbles on a page. From there, I’ll re-work my drawings until they begin to look more life-like and whole.

I rarely work in sketchbooks as I find that I get too precious about them, so instead I draw straight on to loose sheets of paper that I can scan in easily. Once my initial sketches are complete, I transfer them on to watercolour paper and colour them in by hand with ink. Each small element is drawn separately, and then pieced together at the end on my computer. Working digitally is really helpful at this stage – I can experiment easily with the size, positioning and layout of everything until the final illustration is formed.

When did you decide you wanted to be illustrator?

The seed was sown on my Art Foundation course. During this time my work became increasingly narrative based, and I began to concentrate more fully on drawing. Computers used to scare me a lot, so when it came to specialising I quickly chose illustration over graphics. I also had a great tutor who introduced me to the work of different picture book illustrators and encouraged me to pursue the subject.

It was only in the last year of my degree course that I began to think seriously about a career as an illustrator. Once I’d got a stronger grip on my style and how I liked to work, my confidence grew. It was then that I decided I wanted to work towards forging a path in the industry.

Could you describe your typical day?

I like to be up early with a strong cup of tea in hand. After a short cycle down to my studio, I’ll sit down at my desk and make a list of the day’s tasks. If I’m at the start of a book project, I’ll spend the morning focusing on coming up with ideas and doodling on loose sheets of paper. I’ll then work these rough images up on my light box until I’m happy, and later colour them in with ink.

Once I have finished all my drawings for a particular spread, I scan everything in to my computer. I’ll then spend the rest of the day editing and playing around with layout until the whole image has been pieced together. I also find I work well in the evenings when late night inspiration hits. It’s nice to work when the pressure of the day has ebbed away and everyone around you is sleeping!

What’s the best thing about being an illustrator?

Drawing stuff for a living and getting away with it. An idea falling into place. Unlimited tea breaks. Nice feedback from strangers. Getting a laugh. Making books. Doing what I love.

What’s the worst thing about being an illustrator?

Being your own worst critic. A pallid complexion. Days where I can’t draw a thing. Ink stains. Bad posture.

Who is your favourite children’s author?

Roald Dahl. Undeniably one of the greats!

Who is your favourite book character?

‘Madeline’, from the series of books by Ludwig Bemelmans.

Who is your favourite children’s illustrator?

What was the first book you read?

Based on Lucy Letherland’s much-praised and horizon-expanding Atlas of Adventures this new activity book will have children thinking about the wonders of our world as they get busy colouring in, or adding stickers. There are eight different scenes and seven maps to colour in, all with extra things to spot, fifty stickers to apply, including an X with which to mark your own home, and a colourful pull out poster showing the flags of the world. Just right for the holidays, this will bring the world to your child’s desk or table. ~ Andrea Reece

Atlas of Adventures A Collection of Natural Wonders, Exciting Experiences and Fun Festivities from the Four Corners of the Globe

Set your spirit of adventure free with this lavishly illustrated trip around the world. Explore seven continent maps, packed with hundred of activities and challenges to inspire armchair travellers of any age. Whether you're visiting the penguins of Antarctica, joining the Carnival in Brazil or a canoe safari down the Zambezi River, this book brings together epic adventures from the remotest corners of the globe and discoveries to made on your own doorstep. Follow one boy and one girl as they travel to over 30 destinations and discover hundreds of things to spot and facts to learn on every page.