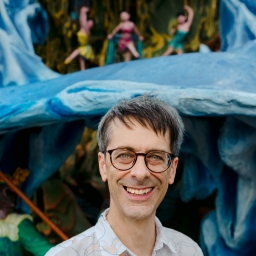 Julian Gough is the author of several novels and children's books, some BBC radio plays, and the narrative at the end of the wonderful computer game, Minecraft (TIME magazine's computer game of the year).

Julian has won the BBC National Short Story Award and has been shortlisted for the Bollinger Everyman Wodehouse Prize for Comic Fiction. He also, in his youth, wrote the words (and sang) on four albums by the cult Galway group, Toasted Heretic, and had a top-ten hit in Ireland with 'Galway and Los Angeles', a song about not kissing Sinead O'Connor. He was born in London, raised in Tipperary, educated in Galway and now lives in Berlin.

A Bite in the Night

Rabbit and Bear: Book 4 | Rabbit is worried: trees in their forest are disappearing and, worse still, the stream has moved – even unflappable Bear declares herself ‘close to being slightly worried’ at that. The cause is the arrival of Castor Canadensis, a beaver, who is delighted with engineering as a means of building ‘New, Bigger and Better things’ in the name of ‘Progress’. It suits some of the animals, but definitely not all. Fortunately, Bear finds a way to get the animals working together, so that Castor’s hard work benefits them all, himself included. As ever, there’s as much insight as humour, and it’s a superb read aloud story. Gough and Field make creating books this good look simple, because they’re both masters at what they do. Treat yourself, and buy all four books.

Attack of the Snack

Rabbit and Bear: Book 3 | Rabbit and Bear, like Claude, are perfect companions for building reading confidence and getting young children hooked into reading. Laugh aloud text and lively illustrations throughout. Gorgeously illustrated and with a classic feel, this is a brilliantly funny story of a rabbit and a bear who discover that things are always better when they're shared with a friend. Ideal for readers moving on from picture books.

The Pest in the Nest

Rabbit and Bear: Book 2 | PEACE AND QUIET,' shouts Rabbit. 'THAT'S ALL I WANT.'Owch. He's hurt his own ears again.What with Bear's snoring, and a BANG!BANG!BANG! noise from up in the tree, Rabbit knows that Something Simply Has To Be Done. But high in the branches, perhaps Bear can show Rabbit how to see the world from a different place ... From novelist and playwright Julian Gough, and the winner of the Roald Dahl Funny Prize, Jim Field, this is a tale of friendship, wisdom, and how to be REALLY NOISY.

Rabbit and Bear: Book 1 | There are lots of unusual friendships in children’s books, very few quite like the one described in this story, and virtually none so comic. Rabbit is such a grouch he can hardly pronounce the word ‘fun’, but then maybe that’s not surprising: he spends his days eating, pooing, then eating his poo. Bear on the other hand is the total opposite, she’s generous, content, and always ready to give people the benefit of the doubt. The story of how their friendship develops over the course of one snowy day (and via a narrow escape from a wolf) is funny, uplifting and beautifully told. Word-perfect, picture-perfect, this is a small work of genius.