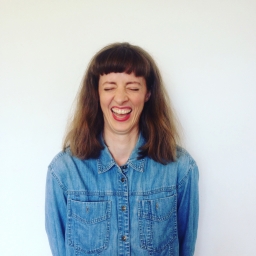 Emily Haworth-Booth is an author-illustrator and educator, teaching courses on comics, graphic novels and illustration at the Royal Drawing School in London and running workshops for adults and children at book festivals, in schools, and at other locations nationwide.

Politics and environmental issues are subjects close to her heart and often appear as themes in her work. Emily’s hotly-tipped debut children’s book, The King Who Banned the Dark (Pavilion, 2018), was shortlisted for numerous prestigious awards: The Klaus Flugge Award (for debut illustrators), The Little Rebels Children’s Book Award, The Waterstone’s Children’s Book Prize, Independent Bookshop Week Book Award. The book is currently nominated for the Kate Greenaway Medal.

Emily won the 2013 Jonathan Cape/Observer/Comica Graphic Short Story Prize for her story ‘Colonic’ and was runner-up of the same prize in 2008. Alongside her children's picture books, Emily is currently working on a long-form graphic memoir for adults. Her short comics have previously appeared in print in the Observer and Vogue. Along with her sister, Alice Haworth-Booth, she is an activist with Extinction Rebellion.

Read a Q&A with the author here.

Following the success of The King Who Banned the Dark, Emily Haworth-Booth has created another timely, beautiful and enthralling fable. As the best stories do, it starts ‘Once upon a time …’ A group of friends looking for somewhere to live choose a peaceful forest, but the longer they live there, the more trees they cut down, and the loss of the trees leads to all sorts of problems. Fortunately, the children of the settlement choose to quietly protect the last tree, and from there rebuild a caring and happy society for themselves and their parents. The artwork, mostly retro green and black, feels timeless and deliberately child-like, but the story is urgent, contemporary and thought-provoking, and will speak direct to readers of all ages.

The King Who Banned the Dark

June 2019 Debut of the Month | Shortlisted for the Klaus Flugge Prize 2019 | Shortlisted for the Waterstone's Childrens Book Prize 2019 | Lots of fun to read, this book cleverly delivers some important messages. The new, young king is frightened of the dark, so on day one of his reign, he decides he’ll ban it. His advisors realise the only way to make that work is if the people think it’s their idea, and start an anti-dark campaign. It works, the dark is banished and, because everyone has got what they thought they wanted, everyone is happy. Until of course, they realise what living in constant light is really like. Emily Haworth-Booth gives her story a fairy-tale feel and fills it full of humour. Little children will identify with the king, but they’ll understand why his scheme is not a good one. Brilliant!