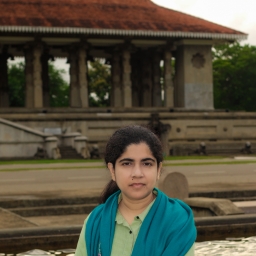 Nizrana Farook was born and raised in Colombo, Sri Lanka, and the beautiful landscapes of her home country find their way into the stories she writes. She has a master's degree in writing for young people, and lives in Hertfordshire with her husband and two daughters.

The Girl Who Lost a Leopard

A Julia Eccleshare Pick of the Month April 2022 | Inventive story teller Nizrana Farook weaves a terrific adventure which cleverly weaves real and imaginary scenes around the saving of a magnificent leopard from the hands of the cruel hunters who are after it. Spirited Selvi has a natural affinity with the beautiful and rich natural world of the mountains of Serendib where she lives. As she spends her life outdoors exploring she comes across Lokka, a beautiful and proud wild leopard with whom she forges a strong bond. While it might seem that Selvi is at risk from Lokka, it is really Lokka who is in danger. There are many people who want to make money from the magnificent creature who will fetch a very big price if he is killed. How Selvi outwits the game hunters, escapes from her wicked uncle and teaches her school friends about the value of conservation is a fast-paced roller coaster that will holder readers spellbound.

The Boy Who Met a Whale

Selected for The Book Box by LoveReading4Kids | Nizrana Farook’s latest adventure story sends readers to Sri Lanka in a story that combines treasure hunts, daring escapes from multiple dangers, and some fantastic blue whale action. Ship’s boy Zheng is washed up on the shores of Serendib after his boat is shipwrecked.  He knows that two villainous crew mates caused the wreck, and he has with him the reason why – his captain’s treasure map showing the whereabouts of the famous Dagger of Serendib. Razi, a local fisherboy, finds and helps Zheng, but the two villains are almost instantly on Zheng’s trail.  With the added assistance of Razi’s twin sister Shifa, the three children just about manage to stay one step ahead, but they need all their wits not to mention the unexpected help of a blue whale.  The story is full of action and a great sense too of the camaraderie that develops between Zheng and Razi and Shifa.  The setting makes this special as well, Farook treating her readers to a vivid encounter with the people, landscape, and wildlife of Serendib. One for all young adventurers!   Readers who enjoy this will also love the author’s previous book, The Girl Who Stole an Elephant, and Natasha Farrant’s Costa winning story Voyage of the Sparrowhawk.

The Girl Who Stole an Elephant

Shortlisted for the UKLA Book Awards 2021 | January 2020 Debut of the Month | Nizrana Farook sets her story on the island of Serendib, now known as Sri Lanka, and transports readers to a vivid, larger-than-life world where young people can be bold, true and have some extraordinary adventures.  Twelve-year old Chaya is a thief with a heart of gold, stealing from the king’s palace to help those in her village.  She makes a mistake when she takes jewels from the queen’s bedroom though, triggering a series of events that leads to Chaya and two friends, villager Neel and merchant’s daughter Nour, fleeing into the rainforest on the king’s elephant. There are brushes with death, but great camaraderie too and it all ends with a much-needed righting of wrongs. Great stuff! Readers swept up in Chaya’s story – and who couldn’t be? – will also enjoy Costa Book Award winner Asha and the Spirit Bird by Jasbinder Bilan.