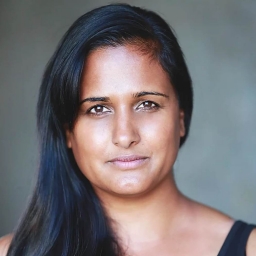 Manjeet Mann came from a socio-economic disadvantaged background not too dissimilar to Run, Rebel’s protagonist Amber; growing up in an area of deprivation in The Black Country in the 1990s. She is an acclaimed writer and producer of several one women shows and episodic plays of personal monologues, exploring womanhood across the socio-economic spectrum. She was an associate artist with The Birmingham Repertory Theatre and the Soho Writers Lab, wrote a short comedy film for BBC writers room and her play Starting Out was adapted into a podcast in 2019.

Longlisted for the UKLA Book Awards 2021 | March 2020 Debut of the Month | This debut novel was inspired by the author’s work creating Run the World, an organisation that empowers women and girls from marginalised backgrounds through sport and storytelling and the authenticity of this, at times harrowing story, is palpably evident. As is the skill of the accomplished writing which makes great use of typography and layout to really make every word count. This speeds the reader through the narrative, but it also cuts deep to reveal the emotions experienced by our narrator. Amber Rai is only ‘truly alive’ when running and shows great potential. But her alcoholic, abusive, misogynistic father refuses to allow her on the track. She has seen her older sister Ruby denied university and married off against her will and her downtrodden, abused mother is literally powerless to help, trapped as much by illiteracy and lack of English as the violence of her equally illiterate, unemployed husband. Amber has friends and teachers who believe in her, but she cannot explain what really goes on at home. She is a complex and believable character with very real flaws that she painfully recognises: ‘inflicting pain on others/halves your own hurt’.  But the story is cleverly structured on The Anatomy of a Revolution and inspired by her reading about revolutions for history, Amber, Ruby and her mother gradually empower each other to take small steps to freedom. This is an important, rewarding, highly empathetic read which, despite the dark subject matter, offers hope but no simplistic solutions.