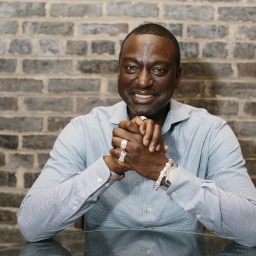 Dr. Yusef Salaam was just fifteen when he was wrongly convicted in the Central Park jogger case, along with four other boys now known as the Exonerated Five. In 2002, after the young men spent years behind bars their sentences were overturned, and they were fully exonerated. Their story has been documented in award-winning film The Central Park Five and acclaimed Netflix series When They See Us. Yusef is now a poet, activist and inspirational speaker who lives in Atlanta, GA. He is the recipient of a Lifetime Achievement Award from President Barack Obama, among other honors.

Ibi Zoboi holds an MFA from Vermont College of Fine Arts. Her novel American Street was a National Book Award finalist and a New York Times Notable Book. She is also the author of Pride and My Life as an Ice Cream Sandwich, a New York Times bestseller. She is the editor of the anthology Black Enough. Born in Haiti and raised in New York City, she now lives in New Jersey.

September 2020 Book of the Month | Co-written by award-winning novelist Ibi Zoboi and Dr Yusef Salaam, a prison reform activist, poet and one of the Exonerated Five, Punching the Air is a timely, heartachingly powerful free verse novel. Through its shatteringly succinct lyricism, Amal’s story is a mighty call to action that rouses readers to question the deep-rooted and damaging consequences of racially biased societal systems, while radiating the light and hope of art and Amal himself. Sixteen-year-old Amal is a talented poet and artist, but even at his liberal arts college, he’s victimised by destructive preconceptions, deemed disruptive by people who “made themselves a whole other boy in their minds and replaced me with him.” Amal’s budding life careers off-course when he’s wrongfully convicted of a crime in a gentrified area. Even in the courtroom it feels to him “like everything that I am, that I’ve ever been, counts as being guilty”. Standing before judgemental eyes in his specially chosen grey suit, he’s aware that “no matter how many marches or Twitter hashtags or Justice for So-and-So our mind’s eyes and our eyes’ minds see the world as they want to/Everything already illustrated in black and white.”   In the detention centre, Amal considers his African ancestry: “I am shackled again,” he says. “Maybe these are the same chains that bind me to my ancestors. Maybe these are the same chains that bind me to my father and my father’s father and all the men that came before.”  He expresses society’s double standards with searing clarity too - Black boys are “a mob/a gang ghetto/a pack of wolves animals/thugs hoodlums men” while white boys “were kids having fun home loved supported protected full of potential boys.” But through the beatings and despair, through anger and frustration, Amal finds solace in the supportive letters he receives from a girl in his school, and his “poet, educator and activist” teacher. By turns soul-stirring and inspiring, this sharp exposure of injustice and testament to the transformative power of art comes highly recommended for readers who love the work of Jason Reynolds and Elizabeth Acevedo.  Find a selection of recommended books that celebrate difference in our blog, Diverse Voices.