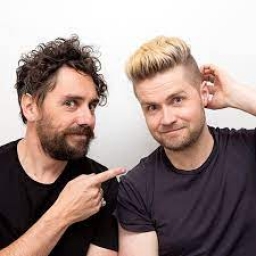 The Brothers McLeod are a five times BAFTA nominated animation company. They have won one BAFTA and a Webby. Their clients are all over the world and have included Hollywood directors Joss Whedon, Gus Van Sant. Their animations have featured stars such as Brie Larson and Stanley Tucci. They have produced animation for Disney, the Royal Shakespeare Company, the Science Museum (London), the BBC and Aardman Animation.

Greg McLeod is a character designer, illustrator and animation director. His short films have been around the world and won a number of awards. His last short film Marfa had its World Premiere at the Sundance Film Festival and was nominated for a BAFTA for Best British Short Animation.

Myles McLeod has written over 100 scripts for broadcast TV. He has written extensively for children’s TV including Octonauts, Hey Duggee, and Noddy Toyland Detective (which he co-created). His work has screened all over the world including on Nickelodeon, Disney XD, BBC, and Netflix. Myles is also a published poet.

Books by The Brothers McLeod

Knight Sir Louis and the Sorcerer of Slime

What’s going on at Castle Sideways? First a band of gnomes launch an attack – thwarted by our hero young Knight Sir Louis – then a handsome squire arrives with news of more trouble: apparently the Wild Forest Ogres of Tumblin Klatterbang are also on their way and planning an attack. Time for Knight Sir Louis to step up again, but oh dear, King Burt the Not Bad has banished his knight and appointed the not-quite-as-charming-as-he-seems Squire now Knight Sir Lyme in his place. With the slimy Sir Lyme ensconced in the palace and feeding everyone his seemingly endless supply of green gummy sweets, Louis sets off to find out what’s going on, leaving his friend wizentor Pearlin and her two-headed pet dragon Mac N Cheese to keep an eye on things at home. He’s helped as always by his trusty steed Sir Clunkalot, his sword Dave and friend Reader Catalogue, as well as various gnomes and ogres. It’s all totally bonkers, but brilliantly funny and full of proper characters and rumbustious adventure. Easily as good as the first two books in this hilarious series which is high praise indeed. Short chapters, tons of pictures and unbeatable adventures make this super-readable. One to recommend to fans of Tom Gates or Phoenix Comic adventures.

Knight Sir Louis and the Dragon of Doooooom!

Knight Sir Louis, champion knight at Castle Sideways, has been sent on another important mission - he must face the dastardly, double-headed dragon, Borax! And his mission isn't made any easier with the tricksy jester Merry-Jingles trying to steal his thunder. Things are about to get hot, then hotter, then boiling ... Luckily, Louis has great friends who can help - a flying robot horse, Clunkalot, an adventurous boar called Catalogue, and Pearlin, the brilliant wizentor. That's bound to help, right? The second adventure in the hilarious series about Knight Sir Louis, including lots of different storytelling, fabulous comic strip illustrations and lots and lots of jokes!

If you like zany, action-packed adventures full of armour, weapons, dastardly enemies and pint-sized heroes, then this is the book for you. Knight Sir Louis is King Burt’s top knight, so when the kingdom is threatened by a dreadful damsel, he knows who to call.  Knight Sir Louis might be small, but he’s not afraid of anything (except – maybe – wasps) so he rides out on his marvellous mechanical steed Clunkalot, armed with his trusty sword, Dave. The adventures that follow are anything but straightforward – one of the many joys of this book is the way the plot progresses in lurches, tangents, and sideways. To quote author Gary Northfield, it’s a masterclass in silliness and one that will have readers doubled over in laughter, while also wishing they had a horse like Clunkie and a kingdom to protect. Packed with illustrations and broken up into short (some very short) chapters, it’s great for readers who struggle with longer books too. Brilliant fun, it’s one to recommend to fans of Julius Zebra or Bunny Vs Monkey.