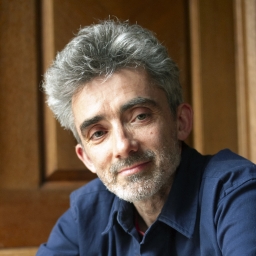 David Farr is is one of the UK's leading screenwriters and directors for film, TV and theatre. In 2009, he was appointed Associate Director of the Royal Shakespeare Company, where his productions of The Winter's Tale, King Lear and The Homecoming all opened to critical acclaim.

David is known for his work on Spooks and his 2016 BBC adaptation of The Night Manager, starring Hugh Laurie and Tom Hiddleston.

He completed his first feature film, Hanna, in 2009, and has since adapted it into a hugely successful series for Amazon Prime.

The Book of Stolen Dreams

October 2021 Debut of the Month | Farr is a master storyteller as evidenced by his phenomenally successful screenwriting and directing for the stage. This is evident in the confidence with which he controls all the elements in this complex, engrossing fantasy thriller – his first novel for a child audience.    Rachel and Robert live in a dictatorship in Brava that makes life very drab and humdrum – as well as very dangerous. Their father is a librarian – and on Rachel’s birthday he involves them in the theft of an important and forbidden book from the precious books room in the city library. For that theft he is captured – leaving the siblings with their ailing mother. When she dies it is planned that they will be separated into different parts of the grim orphanage that exists.     Can they escape that fate, find out the secret of the book they keep hidden and keep it out of evil dictator Malstain’s hands? Meeting a wonderful cast of characters along the way – some good, some bad – they set off on individual journeys across the land to escape Malstain’s reach.    This is a rich story, full of adventure, peril, and huge bravery from the children and many of the other characters, as well as awful evil. It will keep readers engaged and probably reading long after bedtime and lights out!  Inspired by Farr’s great Aunt and Uncle’s escape from Nazi Germany this adventure is set in a timeless world that could be anywhere so that it will chime with children the world over. I hope Farr goes on to write more for children if this, his debut, is anything to go by.