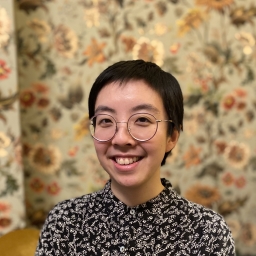 Cynthia So was born in Hong Kong and lives in London. They graduated from the University of Oxford with a BA in Classics in 2016. Their work has appeared in Uncanny, Strange Horizons and Cast of Wonders, among other places. They are also one of the new voices in PROUD, an anthology of LGBTQ+ YA stories, poems and art by LGBTQ+ creators, published by Stripes in March 2019.

Books by Cynthia So

If You Still Recognise Me

June 2022 Book of the Month | Multi-stranded and suffused in sapphic love, Cynthia So’s If You Still Recognise Me debut is a compassionate, cute ode to fandom, finding love, and finding your people. The novel also deftly explores the intersection of sexism and racism, homophobia, and abusively manipulative relationships while remaining a super-sweet coming of age story that’s populated by characters who will make many a heart melt. Elsie is British-Chinese, bisexual, and has a serious crush on Ada, who she met on a comic fandom forum. Though separated by the Atlantic, Elsie is about to disclose her feelings when Joan, her best friend from childhood, returns to study at Oxford Uni after moving to Hong Kong. Cue all sorts of unexpected complications.  Elsie is also still struggling with the lingering effects of an abusively controlling ex, whom she now suspects is one of those “men who see Asian women as submissive and obedient playthings they can dump all their problems on and then discard.” In addition, Elsie’s family is reeling from the death of Gung Gung, her grandad. Why hadn’t they visited him for eight years, and why is her Uncle Kevin so absent? At least Elsie has her new gay, and possibly asexual, comic store co-worker to turn to. A quest to do something wonderful for Ada and her family facilitates a superb representation of older lesbian, gay, bi and non-binary characters – individuals leading gorgeously fulfilling lives who inspire Elsie as she finds herself falling deeply in love, resulting in a sparkling, satisfyingly sincere summer read.

Tweets by Cynthia So