LoveReading View on Across Enemy Seas

This is a new book from L. M. Elliott who wrote the excellent WW2 novel Under a Worn-Torn Sky.  This is also set during World War Two, but tells a very different story: that of two young English brothers who, like thousands of others, were evacuated to America at the beginning of the war.  For Charles and Wesley, America is a strange land, and initially adapting is hard. They are worried about their family back home, and Wesley in particular is scarred by some of the terrible scenes they witnessed on their journey. The boys are overwhelmed by the generosity of their hosts, but encounter hostility too, and witness the racial segregation that the war began to change. Elliott paints a wonderfully vivid picture of 1940s America and the boys’ adventures make for inspiring and informative reading.  ~ Andrea Reece

A Piece of Passion from the editor, Sarah Stewart   Acclaimed for her incredibly real depiction of a WWII soldier’s life in Under A War-Torn Sky, here L.M. Elliott brings to life the rarely-told story of evacuees to America. Following two brothers as they try to reconcile the tragedy they left behind in London with the sunlit American farm life they now find themselves part of, this is a story of family, honour and fitting in. Filled with fascinating facts and real wartime anecdotes, Across Enemy Seas is an authentic slice of history with a big heart.

Evacuated by ship from Blitz-stricken London, Charles and Wes survive deadly submarine attacks to reach America. But Charles is guilt-ridden about leaving his family behind, while Wes is haunted by terrifying nightmares. Together, the boys struggle to come to terms with their new life on a family farm - working alongside German POWs in the fields.

Published to mark the 70th anniversary of VE day.

L. M. Elliott works as a senior writer for the Washingtonian magazine. Under a War-Torn Sky was inspired by her father's experiences in World War II, and his stories of the courage and self-sacrifice of the French Resistance. 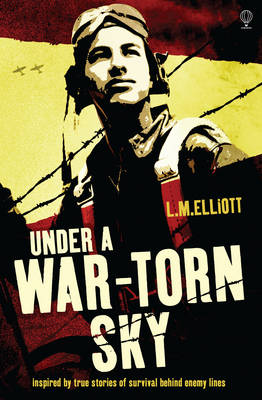