Greta Zargo and the Death Robots from Outer Space

Written by A. F. Harrold

Greta may be orphaned but she is clever, bold and brave - which is handy since she has to keep saving the Earth. This is fast paced, funny and exciting storytelling and the lively illustrations add to the appeal

Greta Zargo is an unusual 11-year-old. An orphan she’s lived on her own since the age of 8 thanks to an unfortunate but legally-binding error on her parents’ otherwise carefully thought-out will. A junior reporter on the local paper, Greta is determined her summer scoop will be solving the mystery surrounding a series of cake thefts. Meanwhile, in outer space a huge space-going robot is heading towards Earth to take over our planet. The two stories zing along in parallel before coming together beautifully at the book’s climax, and thanks to another typo on a key document. The comical characters and situations will thoroughly entertain young readers while the author’s delight in words ad language adds another dimension.

Readers who enjoy Greta’s adventure should look out for books by Andy Stanton and Philip Ardagh, who employ similarly knowing narrative voices, and will also enjoy Norton Juster’s classic The Phantom Tollbooth.

Greta Zargo and the Death Robots from Outer Space Synopsis

Nobody knew it at that moment, but only three things stood in the way of the complete destruction of the Earth: one elderly parrot; one eight-year-old spelling mistake; and an intrepid young schoolgirl-turned-reporter in search of a story ... Greta Zargo needs a big scoop if she's going to win the Prilchard-Spritzer Medal, the quite famous award for great reporting. But big scoops are in short supply in the quiet little town of Upper Lowerbridge, and all Greta's got to investigate is a couple of missing cakes. But then, with a whoosh of unknown energy, a mysterious silver robot descends from the sky ...

A laugh-out-loud funny new series from the author of the critically acclaimed The Imaginary, perfect for fans of Mr Gum, Chris Riddell, and Philip Reeve and Sarah McIntyre's Oliver and the Seawigs.

Full of comical characters and disastrous situations, it will keep children entertained from beginning to end. Booktrust on Fizzlebert Stump

AF Harrold writes with a very distinctive, unusual and utterly charming voice in this warm and funny tale. ... Fabulous. -- Jeremy Strong The Guardian

About A. F. Harrold

A.F. Harrold is an English poet (1975-present). He writes and performs for adults and children, in cabaret and in schools, in bars and in basements, in fields and indoors. He was Glastonbury Festival Website's Poet-In-Residence in 2008, and Poet-In-Residence at Cheltenham Literature Festival in 2010. He won the Cheltenham All Stars Slam Championship in 2007 and has had his work on BBC Radio 4, Radio 3 and BBC7. He is active in schools work, running workshops and slams and doing performances at ungodly hours of the morning, and has published several collections of poetry. He is the owner of many books, a handful of ...

More About A. F. Harrold

More Books By A. F. Harrold 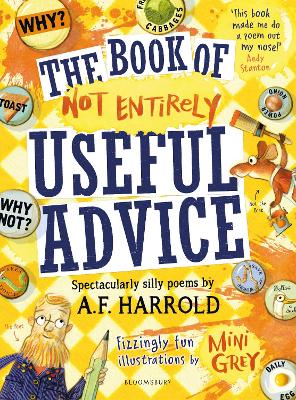 View All Books By A. F. Harrold