Sweeping, stirring saga exploring the bond between a grandmother and granddaughter in 1960s Shanghai

Taking in five decades, three generations and the tender love between a girl and her grandmother, Dragonfly Eyes is an exquisitely-written novel set against a backdrop of unrest and change in 1960s Shanghai. With celebrated Chinese author Cao Wenxuan at the helm, readers are taken on an enthralling journey from a Golden Age in 1920s France, to poverty in post-war Shanghai, to rural Cultural Revolution China, in the beguiling company of Ah Mei and her French grandmother, Nainai.

Ah Mei has always been close to Nainai and, since they look alike, she “looked different from other children; she was different. Wherever she went, silent eyes stared at her from all directions. She would appear a little shy and embarrassed, but inside she would feel a deep swelling of pride...It was as though this little girl had floated down from heaven, and the people around her were caught in a trance.” This otherworldliness runs through the novel - it’s enchanting, illuminating, delicately written, rich in fascinating historic and cultural detail, and the details of everyday life. From Nainai meeting her future husband in 1920s Marseilles, we move to Shanghai, where the family’s silk business has given them the wealth to live in the Blue House, with its exquisite mahogany furniture, grandfather clocks and English porcelain. Here Ah Mei and Nainai enjoy a charmed life, until great waves of change sweep the city and country. First war and post-war poverty, then famine and state-ownership. In 1966 there are protests and growing threats, with Nainai accused of being a foreign spy, but she’s ever-resourceful and makes the very best of things, especially when it comes to Ah Mei. Through the most terrible circumstances, the family manage to make magic through their sadness, and the fundamental hopefulness of humanity glimmers through the most heart-breaking circumstances.

Best suited for confident readers of 11 upwards, this sublime story also come highly recommended for adults who appreciate elegant writing and tales with a timeless, classic atmosphere. I adored every word.

A family saga spanning fifty years and three generations, which takes the reader from the France of the Golden Age to poverty-stricken post-war Shanghai via the re-imagined rural China of the Cultural Revolution.

Ah-Mei and her French grandmother, Nainai, share a rare bond. Maybe because Ah-Mei is the only girl grandchild, or maybe because the pair look so alike - and because neither look much like the rest of their Chinese family.

Politics and war make 1960s Shanghai a hard place to grow up, especially when racism and bigotry are rife, and everyone is suspicious of Nainai's European heritage. Ah-Mei and her family suffer much in this time of political upheaval, and when the family silk business falters, they are left with almost nothing. But Ah-Mei and her grandmother are resourceful, and they have one another - and the tenderness they share brings them great strength.

Cao Wenxuan is one of China's most important children's writers and is widely considered the country's most subtle and philosophical, often referred to as China's very own Hans Christian Andersen - and in fact he was awarded the prestigious Hans Christian Andersen Award in 2016. He is a professor of Chinese literature at Peking University, and has in turn taught some of China's best young writers. Many of his books have been bestsellers, including Thatched Cottage and Red Gourd, and his work has been translated into French, Russian, Japanese, Korean, German and English. Cao has won several of China's most highly ... 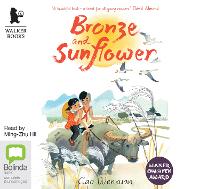 View All Books By Cao Wenxuan