LoveReading View on The Midnighters

Ema Vašková belongs to a family of famous scientists and yet she appears to have the very unscientific ability to predict events, but she is never allowed to talk about this. When she is sent to stay with her eccentric uncle in Prague, she fears she'll lose the chance to ever fit in and become a true scientist like her beloved older siblings. But there she meets the mysterious Silvie and soon the girls are meeting for secret midnight adventures aimed at conquering Ema’s fears.

When Silvie disappears it’s up to Ema to find her with the only clue pointing to the mysterious Midnight Guild. Ema proves herself to be both resourceful and brave and she needs to be. It seems that Silvie has been on a quest to find a murderer and that Ema will discover more about her family history and her own abilities as well as save her friend. Ema is a really engaging heroine and this is an assured, inventive and original fantasy, populated with fascinating, and occasionally macabre, characters with which to follow Tooke’s acclaimed debut The Unadoptables and likely to prove just as popular.

Find the courage to be extraordinary . . .

Ema Vašková has always felt different. In a family of famous scientists, there's not much room for superstition or omens - but they seem to follow Ema wherever she goes. It doesn't help that she appears to predict events before they happen, and has a peculiar fear of shadows . . .

When Ema is sent to stay with her eccentric uncle in Prague, she fears she'll lose the chance to ever fit in. But then she meets Silvie - a girl who finally sees Ema for the extraordinary person that she is. Soon the girls are meeting for secret midnight adventures, and facing Ema's fears together.

But then disaster strikes. Silvie goes missing - and it's up to Ema to find her. Now she must gather the courage to hunt the city, find her friend, and uncover the secrets of the one clue Silvie left as to where she might be - inside the mysterious Midnight Guild . . .

A high-speed, witty, absurd and joyful adventure   Katharine Rundell, author of The Explorer

A compelling, gorgeously-written story about the power of friendship and the true meaning of family . . . perfection! Robin Stevens, author of Murder Most Unladylike

...spectacular wit, dazzling theatrical wonder and huge amount of hope, courage and everlasting friendship. A book to absolutely fall in love with. - Cerrie Burnell, author of The Girl With the Shark's Teeth

Half Dutch, half English, Hana Tooke grew up near Amsterdam and moved to the south of England at the age of twelve. After completing a degree in music, and then a PGCE, Hana was a primary school teacher for several years. Hana also completed the Bath Spa University Writing for Young People MA, and The Unadoptables was shortlisted for The Bath Children's Novel Award 2018. She lives in Bath with two humans and a cat. 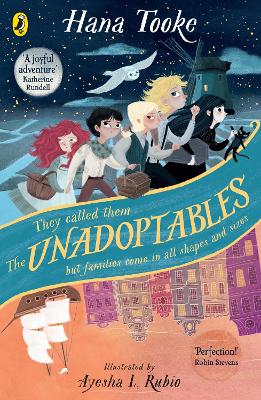 View All Books By Hana Tooke