All the Pieces of Me

LoveReading View on All the Pieces of Me

Themes of true friendship, empathy and really listening are at the fore of this enthralling story about early-teenage angst

Libby Scott and Rebecca Westcott have once again struck gold with this fourth book featuring the relatable, eminently likeable Tally, whose autism means certain things are much harder for her than they are for her peers.

For background, the series was born when Libby’s mum shared some of her writing online – writing that chimed with thousands of people who identified with her experiences. The diary entries featured in these novels are penned by Libby.

All the Pieces of Me will certainly resonate with readers just entering their teenage years. Being “autistic with a PDA profile – which stands for Pathological Demand Avoidance”, all those Year 9 concerns, most notably GCSEs and identity, are heightened for Tally, not least when her best friend moves away, leaving her with an often-cruel peer group who don’t listen to her, and often mock her. While Tally tries to keep positive, acknowledging that “she’s lucky to be part of a group, even if she is on the edges”, she also comments that she “didn’t expect to feel quite so lonely.” It’s also not easy navigating what people mean - “how can we work out what the truth is… if nobody says what they really mean?”

While always honest on the realities of Tally’s struggles and the bullying she faces, this novel also serves as a supportive, positive guiding light for young readers who are trying to find out who they are while navigating the complexities of secondary school friendships.

All the Pieces of Me Synopsis

From the bestselling authors of Can You See Me? comes the fourth exceptional Tally book by Libby Scott and Rebecca Westcott, following on from Ways to be Me, Can You See Me? and Do You Know Me?

Year 9 can be tough for everyone, but for Tally it feels even tougher. Everything seems to be changing as she and her friends get older. Make-up, boys, social media, GCSE prep - why is it all starting to feel so different?

Tally has always known that being autistic means some things are harder for her than they are for other people. But becoming a teenager has left Tally feeling like she has no idea who she even is anymore.  When Libby's mum shared a short piece of Libby's writing online it soon went viral, with tens of thousands of people saying that Libby's writing helped them understand autism for the first time.

This fictionalised portrayal of a young autistic girl is written by Rebecca Westcott, with diary entries by Libby Scott, making it a truly original and authentic book that will give readers of all ages a deeper understanding of what it's like to be autistic.

Perfect for fans of The Goldfish Boy and Wonder Books by Libby Scott and Rebecca Westcott Ways To Be Me Can You See Me?

Do You Know Me? All the Pieces of Me Also available as an eBook and audio book! 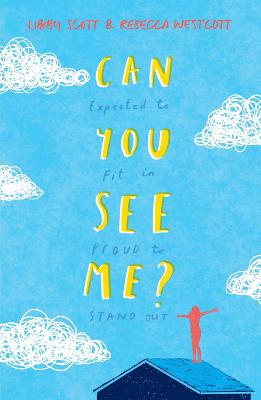