This is a comprehensive and fascinating description of the planning and execution of D-Day, the term given to the day on which the Allied Forces landed in huge numbers upon the French coast at Normandy to launch a massive attack upon the German Wehrmacht in June 1944.  Henry Brook uses the real-life experiences from those involved to tell the story of D-Day, from soldiers in combat for the first time to French resistance fighters, each tale is woven around relevant facts about the Second World War including the ships and boats used, the military tactics employed and the terrible loss of life incurred.

This is one of three books included in a special boxset from Usborne called True Stories of the Second World War published in association with the Imperial War Museum to mark the 70th Anniversary of D-Day.
You may also be interested in the companion books of this series, The Blitz and The Second World War.

Eleven thrilling true stories of the world-shaping events of June 6th 1944. Contains real life tales of courage and bravery during the struggle for the beaches of Normandy, from tank commanders to paratroopers, commando raiders to French Resistance fighters.

Internet links take readers to recommended websites where they can find out more about D-Day. A new edition to tie in with the 70th anniversary of D-Day. 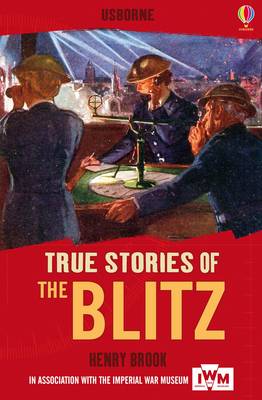 View All Books By Henry Brook