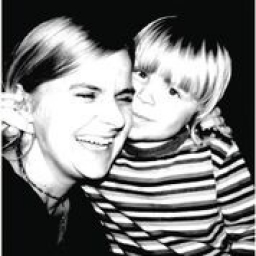 Britta Teckentrup is an award winning illustrator, author and fine artist. She was born in Hamburg and grew up in a city called Wuppertal.

She moved to London in 1988 to study illustration and fine art at St Martin's College and the Royal College of Art. Her awards include a nomination for the Deutscher Jugendliteraturpreis and two Special Mention at the Bologna Ragazzi Award for 'Alle Wetter' and 'The Egg'.

'Don't Wake Up Tiger' was Dutch picture book of the year 2018 and 'Under the Same Sky' on the shortlist for the Kate Greenaway Award.

Britta has been invited to give workshops at The Edinburgh Book Festival, Hay Festival, Bath Festival and Ilustratour and her fine art work has been frequently exhibited at her London gallery and at art fairs all over the world. You can listen to an interview on Deutschlandfunk here.

Since 1993 Britta has written and illustrated over 100 picture books which have been translated into 25 different languages.

After 17 years in the UK - Britta now lives and works in Berlin with her Scottish husband and their son Vincent.

It is evening and the big and little hedgehog are slowly making their way home. There is so much to see, and the little one wants to take it all in. Each step of the way the big hedgehog patiently asks, “What are we waiting for now?” The little hedgehog’s answers unfold in a series of lush landscapes as the two animals wait for the sun to set, for birds to fly by, for the moon and stars to appear, and for the world around them to prepare for sleep. At last, the little hedgehog is also asleep, carried home in the big hedgehog’s arms. Perfect for naptime, bedtime—or for any time that asks that we take a moment and slow down— Teckentrup’s signature combination of simple text and soothing illustration will appeal to readers young and old.

A Julia Eccleshare Pick of the Month September 2020 | Emotionally rich and full of the kind of questions that need discussing and answering, Britta Teckentrup’s beautiful picture book explores the complicated relationships and emotions that are commonplace for every child in any school. The soft focus illustrations capture the different moods of the characters perfectly and are well- supported by brief stories which provide some background which, in turn, throws up a raft of questions: Why are some children bullied? Why does no one stand up for them? How can it be right that a teacher can put a student off a subject by being mean to them? How can you help someone who is lonely? Why do some children exert power over others? Children will enjoy this on their own but it will work best as a spur for important conversations.

A beautiful story about sadness, depression and hope. Blue lives in the darkest depths of the forest. He has long forgotten how to fly, sing and play. The other birds swoop and soar in the sky above him, the sun warming their feathers. But Blue never joins in. Until, one day, Yellow arrives. Step by step, Yellow reaches out to Blue. With patience and kindness. And little by little, everything changes... A thoughtful and uplifting story. Perfect for helping children learn how to deal with and understand sadness, and how to be there for people in their lives struggling with depression.

The Seedling That Didn't Want to Grow

A Julia Eccleshare Pick of the Month March 2020 | March 2020 Book of the Month | The wonder of nature and in particular the growth cycle of a tiny seed are beautifully captured in Britta Teckentrup’s luminous illustrations and simple text which, more widely, celebrates finding your own way in the world whoever you are. What happens when one tiny seed takes a long time to get growing? It soon discovers that the faster growing seeds have taken all the space and light. Undaunted, and guarded first by ant and ladybird and later by more and more creatures of the woodlands, the tiny seed begins its own journey seeking out spaces that enable it to flourish and fulfil its potential. It’s a joy to dwell on the illustrations and to let message sink in.

My Little Book of Big Questions

April 2019 Book of the Month | This is a book to encourage contemplation, one that in our frenetic world enables children to be able stop and think about things without being graded. It accepts that not all questions have answers, certainly not right or wrong ones, and that conversation is vital to working things out. Amongst the big questions posed are some that are existential: why am I afraid of what I don’t know? Why do some people turn nasty when they are in large groups? And others that are hypothetical and abstract: Is it possible to understand the whole universe? Britta Teckentrup’s dreamy, richly textured illustrations seem to allow each one space and quiet enough for the reader’s thought process. Beautiful and unusual, this will start all sorts of discussions.

Illustrated by Britta Teckentrup with typically vibrant colours and eye-catching compositions, We Are Together is a beautiful book. On each page children stand in different scenes, some are there on the page, others we glimpse through carefully-placed cut-outs. More and more appear on each page until at the end they all stand together, one big, happy crowd. The text emphasises the importance of community, of embracing all that life has to offer, and of the importance of friends particularly ‘when the icy winds blow’. Young readers will love looking at the different children, who though small are all individual characters, while the different scenes are wonderfully bright and lively, teeming with animals, birds or flowers. A book to inspire readers.

Britta Teckentrup has established herself as one of the most popular children's book authors today. Her vibrant, collage- based illustrations have made her books a favorite in homes, schools, and libraries. And her character, Oskar, based on her family cat of the same name, is the perfect companion for young readers.

Under the Same Sky

Shortlisted for the CILIP Kate Greenaway Medal 2018 | Longlisted for the UKLA 2018 Book Award | With its dedication, ‘For a united world …’, Britta Teckentrup’s new picture book is a celebration of the things that bring us all together. ‘Wherever we are’ reads the text, ‘we live under the same sky, feel the same love, play the same games, and dream the same dreams’.These short lines are cleverly highlighted in peek-through shapes that link the different pages together and each spread depicts animal families across the world. Teckentrup’s textured collage style illustrations are extraordinarily beautiful and create a real sense of calm, togetherness and hope. With a vital message of unity and friendship, this is an important and moving book to share with children.

Featuring the same gorgeous colors and geometric collages that have made Teckentrup such a popular author and illustrator worldwide, this story will speak to young readers, who will learn about the many forms friendship takes while enjoying Teckentrup's beautiful illustrations.

Under the Same Sky

Shortlisted for the CILIP Kate Greenaway Medal 2018 | Longlisted for the UKLA 2018 Book Award | With its dedication, ‘For a united world …’, Britta Teckentrup’s new picture book is a celebration of the things that bring us all together. ‘Wherever we are’ reads the text, ‘we live under the same sky, feel the same love, play the same games, and dream the same dreams’. These short lines are cleverly highlighted in peek-through shapes that link the different pages together and each spread depicts animal families across the world. Teckentrup’s textured collage style illustrations are extraordinarily beautiful and create a real sense of calm, togetherness and hope. With a vital message of unity and friendship, this is an important and moving book to share with children.

Oskar, a small, black bird, loves lots of things: the deep blue sea, the smell of spring, pictures. He loves to lose himself in a book, walking in the moonlight, and the silence of snow. Each of his passions is depicted on its own clean, clear spread, in simple, bold collage illustration, with Oskar himself a lively presence centre page. ‘What do you love?’ he asks at the book’s end and, inspired by Oskar, little children will have no shortage of suggestions. Simple, stylish and beautiful to look at, this is a wonderful book for sharing.

April 2016 Book of the Month A little girl’s dreams take her and a friendly lion on a magical journey. Together they fly over meadows, swim deep in the sea with whales and jellyfish, and explore woods where they play with wild creatures, until the night ends. Britta Teckentrup’s textured collage style illustrations create scenes that are full of depth and atmosphere and very beautiful to look at. The palette changes from the light grey of dusk through the dark shades of deepest night, the green of the sea and the mottled shadows of the forest, until the new day begins with a burst of bright, warm yellow. The story gives children a wild adventure, in the company of a trusted friend, and the illustrations are perfect works of art. ~ Andrea Reece