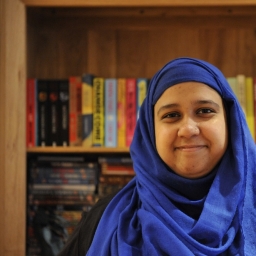 Yasmin Rahman is a British Muslim born and raised in Hertfordshire.

As a child, she wanted to be a postwoman, but decided to settle for being an author. She has an MA in Creative Writing from the University of Hertfordshire and an MA in Writing for Young People from Bath Spa University, both with Distinction.

Her short story 'Fortune Favours the Bold' was published in the Stripes anthology A Change is Gonna Come in 2017, with the Bookseller awarding the contributors a YA Book Prize Special Achievement Award 2018 for commitment to making YA publishing more inclusive. When she's not writing, Yasmin makes bookish fan art; her designs are sold worldwide on behalf of John Green.

This Is My Truth

Friendship and family in all their complicated forms, domestic abuse, bullying, finding the strength to confront the truth - Yasmin Rahman’s This is My Truth packs a whole lot of big themes into its compassionate pages. The harrowingly authentic scenes of an abusive marriage show how male bullies operate in the domestic sphere - the control, the pathetic physical intimidation and harm they conceal from family and friends. This is powerfully important stuff, powerfully and honestly portrayed by the author of the acclaimed All the Things We Never Said. As Amani faces the stresses of her impending GCSEs (exacerbated by the pressure to become a vet like her abusive, controlling father), she finds an outlet in doing what she really loves - making films, “practically the only thing that brings me joy.” But alongside making playful pastiche movies with her little brother Ismail (their relationship is a thing of beauty), she documents the Bad Nights by filming her face while listening to her father abuse her mother. Meanwhile, Amani’s best friend – super-smart, super-confident Huda - stands up to bullies, but hides secret struggles of her own. Huda lives with loving foster parents, but with their own baby on the way, she’s scared she’ll be pushed out. As a result of their secrecy, Amani and Huda are envious of each other’s home lives, until Huda witnesses an abusive outburst. Though it (rightfully) doesn’t shirk from the brutal reality of bullying and abuse, This is My Truth is ultimately a story of hope and survival as the seeds of future flourishing are sown.

All the Things We Never Said

Three beautifully drawn, distinctive and compelling voices narrate this heartbreakingly honest story. All three are young women dealing with depression and mental health issues. The story starts with Mehren and the depression and anxiety which she personifies as “Chaos” are overwhelming her life causing her to sign up to a terrifyingly authentic suicide website called MementoMori, a website that matches people with partners and allocates them a date and method of death. This is where she met Cara and Olivia. We learn that Cara is blaming herself for her father’s death and her own injuries while Olivia is suffering from the abuse that started when she was fifteen. The girls share their problems and find strength and friendship while completing the bizarre tasks set them by the website. The different points of view enable the reader to understand how mental health affects us all differently. The book pulls no punches and librarians and teachers must be wary of triggering descriptions of suicide attempts and abusive situations. But the authentic representations are extremely valuable for increasing understanding and showing that each culture and situation has its own unique problems. Family relationships and secondary characters are equally well depicted and although dark and intense the resolution is realistically hopeful. An impressive and important debut.