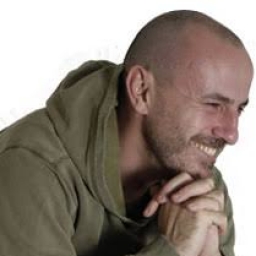 Patrick Neate is the author of seven novels, including Twelve Bar Blues, which won the Whitbread (now Costa) Novel Award, and two books of non-fiction, including Where You're At, which won the National Book Critics Circle Award for criticism. His film scripts include an adaptation of his own novel City of Tiny Lights, starring Riz Ahmed and Billie Piper, and pianist James Rhodes's best-selling memoir Instrumental.

He is also the founder of Book Slam, London's first and greatest literary shindig.

Patrick Neate’s Small Town Hero melds a sensitive handling of real-life loss with alternate world weirdness to create a surprising, unique novel. There’s grief and gaming, family secrets and football, and the interwoven themes of loss and science will appeal to readers who liked Christopher Edge’s The Many Worlds of Albie Bright and are now a little older.   Everything changed for thirteen-year-old Gabe when his dad died in a car accident. First there’s his grief, which has created a “black hole inside me.” Then there’s his unsettling new ability: “the stories I imagine become real.” Reeling with grief and confusion, Gabe finds he’s not entirely alone when he spends more time with his estranged Uncle Jesse, writer of an online game called Small Town Hero, which - to make matters even weirder – appears to echo Gabe’s life. Jesse believes “there aren’t just a few realities, but a countless number” and explains that when Gabe shifts realities and sees alternate versions of his present and future life, he’s crossing something called an “event horizon”.    As Gabe’s reality-shifting plays out, he also falls out with his best friend. Still, he has Soccer School to look forward to, and here Gabe takes on pertinent football wisdom from one his Watford icons: “Football’s a game of moments. You get the ball, you choose a pass and, whether you chose right or wrong and did it well or badly, the moment’s gone and you gotta move on…the game makes you live in the here and now – you can’t change what’s gone and you can’t see what’s coming.”  For similar books you can find an exciting and varied selection in our new Gritty Reads section