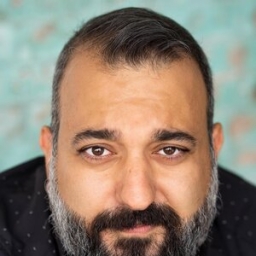 Daniel Nayeri was born in Iran and spent a couple of years as a refugee before immigrating to Oklahoma at age eight with his family. He is the publisher of Odd Dot, an imprint of Macmillan, making him one of the youngest publishers in the industry. He has served on the CBC diversity committee and the CBC panel committee.

Everything Sad Is Untrue

‘Every story is the sound of  a storyteller begging to stay alive’, says Khosrou – or Daniel as he’s known to his new classmates in Oklahoma - the narrator of the many wonderful stories that make up this book. Central of course is his own story, how with his mother and sister he had to flee his home in Iran, leaving his father behind, but there are also the stories of his grandparents and great-grandparents, plus the myths that he’s grown up with.  Horribly picked on at school and tormented at home by his new step-father, he shares his stories Scheherazade-like with his class and with us, the lucky readers, and because of that we know that one day he will be whole again. Poignant, touching, funny and heart-breaking, this is a book in a million, a story that will connect with every person who reads it and become part of their own.