Part of the Wolfe & Lamb Series

Lauren St John knows just how to create the perfect children’s adventure stories.  Her junior detectives Kat Wolfe and Harper Lamb return for a second outing in this new book, another enthralling adventure that combines crumbling cliff edges, dinosaur bones, an A list celebrity who isn’t what she seems and, of course, lots of glorious animals.  As they investigate a suspicious death, Kat and Harper face real dangers, but quick-thinking and teamwork, not to mention a bit of luck, see them through. There’s an important eco-message contained in the adventure too and this is exactly the kind of book to encourage children’s interest in the environment and their world as the pages keep turning. Thoroughly recommended.

Join brave Kat Wolfe and her animal sidekicks in this second mysterious adventure filled with friendship, freedom and a fierce wild cat! When a landslide on the Jurassic Coast reveals a rare `dragon' dinosaur, best friends Kat Wolfe and Harper Lamb are thrilled, especially when stars and scientists come flocking to sleepy Bluebell Bay. But after they begin investigating a suspicious death, events spiral quickly out of control for detectives Wolfe and Lamb. Worse still, Kat's wild cat is in trouble. Can they solve the mystery - and save the cat's life - before it's too late?

Kat Wolfe Takes the Case is the second book in Lauren St. John's Wolfe & Lamb series, and is illustrated by Daniel Deamo.

Some of our LoveReading4Kids Reader Review Panel members were lucky enough to review the first in this series, Kat Wolfe Investigates. You can read their full reviews by clicking here.

A story with a great sense of adventure, transporting you to that place of excitement when you can't wait to find out what happens next! - The Book Activist, Book of the Month

All you want from a good mystery - a compelling storyline, a determined lead character, heroes and villains, some intriguing animals for a refreshing change... all excellently interwoven - Parents in Touch

Kat Wolfe Investigates is the kind of book I'd have devoured as a child - lucky, lucky kids having this to read now. -- Abi Elphinstone Warm, intriguing characterisation with just the right amount of peril - not to mention a resident wildcat. -- Imogen Russell Williams - Guardian

St John is a wonderful writer... this is just the sort of thoroughly wholesome novel that should really be consumed outdoors. -- Emily Bearns - Telegraph

Full of adventure, excitement, heart and wit... Kat Wolfe Investigates is a story to delight in. -- Katherine Rundell St John's book is suspenseful in its shifting possibilities, constructed with care, scattered with information, techno-savvy and engaging in its characterisation -- Nicolette Jones - Children's Book of the Week, Times

Everything you want from a Lauren St John book: timeless storytelling with a contemporary edge, thrilling mystery, characterful animals and tenacious children yearning to make their mark on the world. - Editor's Choice, The Bookseller

Hurrah for a new series from Lauren St John! It's literary Katnip for the summer holidays - especially for dedicated pet fanciers... St John writes with apparent ease, but refuses to compromise on language while mixing modern life with old-fashioned Blyton-style follow-the-clues mystery. It's an excellent combo. If this first invigorating book is anything to go by, St John had better start writing some follow-ups. -- Alex O'Connell - Saturday Times, Children's Book of the Week

Lauren St John grew up surrounded by horses and wild animals on a farm and game reserve in Zimbabwe, the inspiration for her memoir, Rainbow’s End. After studying journalism, she relocated to the UK, where she spent nearly a decade on the European and PGA Tours as golf correspondent to the Sunday Times. She also wrote the acclaimed music biography Hardcore Troubadour: The Life & Near Death of Steve Earle. She is the author of the multi-award- winning The White Giraffe series for children, as well as the Laura Marlin mysteries, the ... 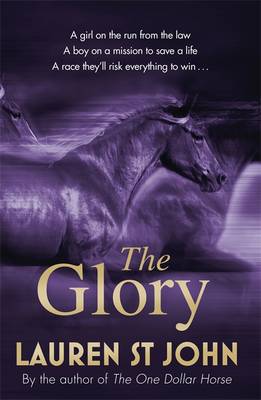