Sam Wu is Not Afraid of Zombies

Part of the Sam Wu is Not Afraid Series

LoveReading View on Sam Wu is Not Afraid of Zombies

This is the fifth book in this terrific series for young readers, and Sam Wu has already conquered his fear of ghosts, sharks, the dark and spiders (with the help of his friends of course) but zombies – in fact, zombie-werewolves – that’s a whole new kettle of scariness.  They happen to be living in the basement in his arch-nemesis Ralph Zinkerman’s home too. Can Sam overcome his fear and save the day? There are surprises and mishaps galore before a terrific climax that sees zombies (or are they?) rampaging all over the local museum. Great adventure, great fun and wonderful to look at too thanks to Nathan Reed’s illustrations.

Sam Wu is Not Afraid of Zombies Synopsis

The brilliantly funny fifth book in the SAM WU series, starring the bravest scaredy-cat in the world! Perfect for reluctant readers and fans of Tom Fletcher, Pamela Butchart and Humza Arshad's Badman.

There's hardly anything that Sam Wu is afraid of. Unless you count ghosts, sharks, the dark and maybe even spiders. But definitely NOT zombies. Except for actual real ones maybe.

So when Sam's arch nemesis, Ralph Zinkerman the Third announces that he has zombie werewolves living in his basement, for the first time ever, Sam really isn't sure if he wants to be the one to save the day. Ralph has always been pretty mean to him and, well, just one little nibble from the zombie werewolves wouldn't hurt that much, would it?

Common childhood fears dealt with in a hilarious, sensitive and accessible way.

Sam Wu is Not Afraid of Zombies Press Reviews

'Illustrated fiction is still having something of a boom, but if you're looking for a non white protagonist it's slim pickings indeed. Happily Sam Wu is about to change all that. A hero of Asian heritage with a diverse set of friends . . . it's enormous fun, madcap and relatable.' - The Bookseller

Katie and Kevin Tsang met in in 2008 while studying at the Chinese University of Hong Kong. Since then they have lived on three different continents and travelled to over 40 countries together. They currently live in London. Kevin was born in Copenhagen and grew up in Atlanta, Georgia. Some of Sam Wu's experiences are based on Kevin's childhood (he's feeling much more confident now). Katie was born and raised in Southern California. She has previously worked at Booktrust, the UK's largest children's reading charity, and also writes YA fiction as Katherine Webber. 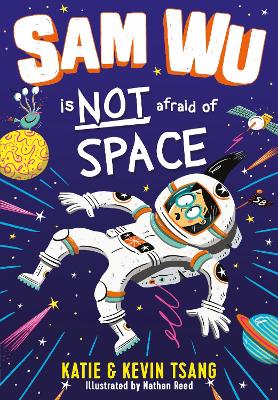