A haunting tale of appalling war, guilt and ultimate redemption that will stay with you for a lifetime

This novel moves from poetry to prose, and back again, as it explores a girl’s relationship with her Grandfather.  Mizuki can see something is deeply troubling to her Grandfather Ichiro, but she can’t find its source, except it is somehow connected with an old book and Ichiro’s need to create origami paper cranes from it.

Mizuki’s worries are expressed in verse before we jump back into prose - to the at times brutal description of the day the bomb fell on Hiroshima and Ichiro’s role in that day and beyond.  The descriptions of the effects of the bomb are based on effective research and from survivor’s tales and told in such a way that the reader is entirely there in the moment and the long days after as Hiro rebuilds a life for himself. As we return to Japan in 2018 the novel reverts to poetry to the very modern tale of how Mizuki uses the internet to try to get to the bottom of the problem facing her elderly grandfather.

The illustrations in the book help create the many impressions and emotions aroused by the story – they are based on Japanese brush and ink techniques and add a further layer to this already impressive book. This is a harrowing tale but the ultimate redemption in the story leaves one with a sense of hope. Highly recommended.

Find out more about the UKLA Awards 2021

The Last Paper Crane by Kerry Drewery was praised for its sensitive and compassionate handling of history, the enriching discussion that it provoked and for the fact that it was so cleverly constructed with the use of different text formats and with  the illustration by Natsuo Seki enriching the emotional impact. UKLA 2021 11-14 age category

A Japanese teenager, Mizuki, is worried about her grandfather who is clearly desperately upset about something. He says that he has never got over something that happened in his past and gently Mizuki persuades him to tell her what it is.

We are taken to 1945, Hiroshima, and Mizuki's grandfather as a teenage boy chatting at home with his friend Hiro. Moments later the horrific nuclear bomb is dropped on Hiroshima. What follows is a searing account of the blinding flash, the harrowing search for family and the devastation both human and physical. There is also the very moving and human story as the two teenage boys with great bravery search for and find Keiko, Hiro's five-year-old sister. But then Keiko is lost when Mizuki's grandfather has no option but to leave her in a safe place while he goes for help... Despite a desperate search in the aftermath of the bomb, where he leaves origami folded paper cranes for Keiko with his address on everywhere a survivor could be, he cannot find her...

A powerful novel that, despite its harrowing subject matter, has hope at its heart

Kerry Drewery has always had a passion for writing. She was a finalist in a BBC script-writing competition in 2009 and is currently hugely involved with Bookstart. Kerry lives in Lincolnshire with her husband and children. The story of A Brighter Fear was created through Kerry’s own fascination with the Iraq war. Kerry’s sensitive approach creates a beautiful, contemporary fairytale that will stay with teen readers for a lifetime. 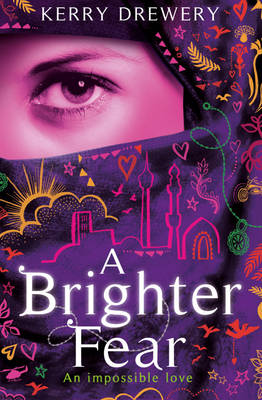 View All Books By Kerry Drewery