The Problem with Pierre

LoveReading View on The Problem with Pierre

Bertram and Alan are best friends and live next door to each other. Bertram is very tidy whilst Alan lives in a bit of a mess!  Bertram feels there is something missing in his life and decides to get a cat. Pierre is a very superior cat – one that Bertram feels will fit in his life perfectly.

The only problem is that Pierre has other ideas!  He is not keen on eating out of his special bowl – and likes to go next door and eat Alan’s scraps, curl up on Alan’s old coat, and cuddle up with Alan whilst he watches the TV.  So, Alan gives Bertram his old coat, and Bertram starts to leave Pierre scraps on the table - but there is still something missing!  The two neighbours come up with an ingenious solution – illustrating that friendship can overcome even the contrariness of cats!

A tale of friendship and cooperation illustrated in a lovely free-flowing style, full of colour. The double spreads of the book illustrate the difference between the two friends – with the spick and span Bertram’s home on one side and the mess and disorganisation of Alan’s on the other! The comparisons will keep children studying the pictures for a long time. There is a great deal to see in all the spreads, and readers will enjoy the many different things they can pick out!

The Problem with Pierre Synopsis

Alan and Betram are next-door neighbours. They are also best friends. They are also very, very different to one another. Bertram is extremely neat, and Alan is wildly messy. When Bertram gets a cat, called Pierre, he is dismayed to find that Pierre prefers it at Alan's house. Alan tries to help his friend out - giving him his old sheepskin coat, his chipped bowl and finally, his beat up old sofa. At last, Pierre and Bertram are happy, but Alan is not - he has no company and no sofa.

Fortunately, Bertram comes up with a brilliant solution to the problem.

The Problem With Pierre plays with the format of the book, splitting each spread down the middle - the page on the left is Bertam's neat-as-a-pin living room, and the right hand page is Alan's homely chaos. When, at the end, Bertram knocks through the wall between the two houses, and puts the sofa in the middle, there is a coming together of content and format that is sure to delight readers young and old.

C K Smouha is a children's author whose previous books include Born Bad, Sock Story and Iced Out. 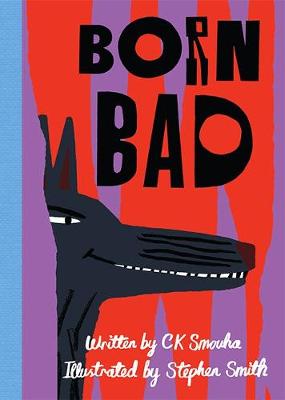