This Is My Truth

LoveReading View on This Is My Truth

Two devoted friends, two sets of struggles, one heart-warming story of overcoming fear and bullies through courage and facing the truth

Friendship and family in all their complicated forms, domestic abuse, bullying, finding the strength to confront the truth - Yasmin Rahman’s This is My Truth packs a whole lot of big themes into its compassionate pages. The harrowingly authentic scenes of an abusive marriage show how male bullies operate in the domestic sphere - the control, the pathetic physical intimidation and harm they conceal from family and friends. This is powerfully important stuff, powerfully and honestly portrayed by the author of the acclaimed All the Things We Never Said.

As Amani faces the stresses of her impending GCSEs (exacerbated by the pressure to become a vet like her abusive, controlling father), she finds an outlet in doing what she really loves - making films, “practically the only thing that brings me joy.” But alongside making playful pastiche movies with her little brother Ismail (their relationship is a thing of beauty), she documents the Bad Nights by filming her face while listening to her father abuse her mother.

Meanwhile, Amani’s best friend – super-smart, super-confident Huda - stands up to bullies, but hides secret struggles of her own. Huda lives with loving foster parents, but with their own baby on the way, she’s scared she’ll be pushed out. As a result of their secrecy, Amani and Huda are envious of each other’s home lives, until Huda witnesses an abusive outburst.

Though it (rightfully) doesn’t shirk from the brutal reality of bullying and abuse, This is My Truth is ultimately a story of hope and survival as the seeds of future flourishing are sown.

This Is My Truth Synopsis

Your friend or your secret - which one will you keep?

A powerful book tackling two important subjects, domestic violence and living in foster care, particularly in the Muslim community, by the author of All The Things We Never Said, nominated for the Carnegie Medal, and YA runner-up in the inaugural Diverse Book Awards 2020.

Best friends Amani and Huda are getting nervous about their GCSEs - and their future beyond school, which they're both wildly unprepared for. Shy, quiet Amani has an outwardly picture-perfect family - a father who is a successful TV presenter, a loving mother, and an adorable younger brother - while confident and impulsive Huda has grown up with over-affectionate foster parents who are now expecting a baby of their own. Both girls are jealous of each other's seemingly easy life, without realising the darkness or worries that lie underneath.

Then Huda witnesses Amani's father hitting her mother, and Amani's biggest secret is suddenly out. As Amani convinces Huda to keep quiet by helping her with her own problems, a prank blog starts up at school, revealing students' secrets one by one. Will this anonymous blogger get hold of Amani's secret too? Will Huda keep quiet?

This Is My Truth Press Reviews

Told from three viewpoints, this is an ultimately hopeful book, which does not shy away from the mental health pressures that young people may find themselves under. The author has experienced her own version of what Mehreen is going through, in a culture with little understanding of mental illness. This makes Mehreen's narrative all the more powerful and believable, without detracting from those of Cara and Olivia, who are fully realized characters with their own distinctive voices. It is very readable with moments of humour. This is a very timely book dealing with sensitive topics, which does not glorify suicide but aims to show that it is not the answer. Friendship can be truly life-saving - Armadillo Magazine

Praise for All The Things We Never Said:

Yasmin Rahman is a British Muslim born and raised in Hertfordshire.  As a child, she wanted to be a postwoman, but decided to settle for being an author. She has an MA in Creative Writing from the University of Hertfordshire and an MA in Writing for Young People from Bath Spa University, both with Distinction. Her short story 'Fortune Favours the Bold' was published in the Stripes anthology A Change is Gonna Come in 2017, with the Bookseller awarding the contributors a YA Book Prize Special Achievement Award 2018 for commitment to making YA publishing more inclusive. When she's not writing, ... 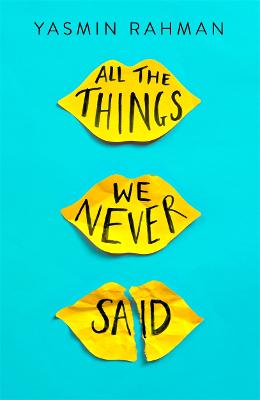 View All Books By Yasmin Rahman