The Terrible Thing That Happened to Barnaby Brocket

LoveReading View on The Terrible Thing That Happened to Barnaby Brocket

Shortlisted for the Little Rebel Children's Book Award 2013.  In an entertaining adventure that is also full of charm and whimsy, best-selling author John Boyne champions the right of children to be different. Barnaby Brocket’s parents want only thing – to lead an utterly normal life. But when Barnaby, their third child is born, they know at once that he is very far from normal. The problem is, Barnaby cannot stay on the ground; he floats ever upwards unless weighted down or restrained. Embarrassed by their problem son and the attention he may attract, Barnaby’s parents let him go…Now a free spirit and travelling in many different ways, Barnaby’s adventures take him across the world where he meets all kinds of people who, just because they are not exactly what their parents want them to be, have been similarly disowned by their parents. ~ Julia Eccleshare

The Terrible Thing That Happened to Barnaby Brocket Synopsis

There's nothing unusual about the Brockets. Normal, respectable and proud of it, they turn up their noses at anyone different. But from the moment Barnaby Brocket comes into the world, it's clear he's anything but ordinary. To his parents' horror, Barnaby defies the laws of gravity - and floats. Barnaby tries to keep both feet on the ground, but he just can't do it. One fateful day, the Brockets decide enough is enough. They never asked for a weird, abnormal, floating child. Barnaby has to go...Betrayed, frightened and alone, Barnaby floats into the path of a very special hot air balloon - and so begins a magical journey around the world, with a cast of extraordinary new friends.

The Terrible Thing That Happened to Barnaby Brocket Press Reviews

Boyne's previous children's novels have dealt with serious, life-changing themes and his deftness of touch is equally evident in this uplifting celebration of otherness
Daily Mail

It's unashamedly and often delightfully whimsical. It's lovely to look at ... It has much of the pell-mell what-the-hell-happens-nextness of Dahl and Ibbotson -- Mal Peet
Guardian

Very entertaining reading ... This is a book very much on the side of the child, operating rather in the same way that, for example, the children's novels of Roald Dahl operate. But Boyne's humour is much gentler and subtler than Dahl's ... Oliver Jeffers's black-and-white illustrations capture both the wit and pathos of Boyne's text Irish Times

A fun and thought-provoking story of self-discovery, and the humour and gentleness with which Boyne delivers his message make it both unforgettable and delightful Publishers Weekly

John Boyne was born in Dublin, Ireland, in 1971, and studied English Literature at Trinity College, Dublin, and creative writing at the University of East Anglia, Norwich, where he was awarded the Curtis Brown prize.He has written a number of short stories; his first story, The Entertainments Jar, was shortlisted for the Hennessy Literary Award in Ireland. His 2006 novel, The Boy in Striped Pyjamas, was made into an award-winning Miramax film. The novel itself won 2 Irish Book Awards, the Bisto Book of the Year, and was shortlisted or won a host of international awards. Amongst other accolades, it spent more ... 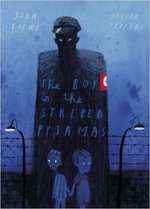 View All Books By John Boyne