Homes illustrated by Hector Dexet and published by Laurence King in April 2020 is a board book featuring all kinds of houses for all kinds of different creatures.

From boats and trucks to trains, limousines and hot air balloons, explore a huge range of different ways to travel in this charming board book. With peep-through holes throughout, there's a fun surprise on every page. Part of an original and exciting new series of board books with bright and bold illustrations.

Duck and Penguin Are Not Friends

I'm Sticking with You

Bear and Squirrel are best friends and do everything together. Bear describes it beautifully: ‘Like peas in a pod, you and I fit/ Like strawberries and cream, we are a hit’. The pictures however are telling a different story and we can all see that sometimes – quite often in fact – Squirrel is more than a little irritated by Bear, not to mention squashed, bashed and accidentally knocked about! When it all gets too much, Squirrel tells Bear he needs space and Bear, being a really good friend, understands. Check the illustrations again though, and we can see that life without Bear just isn’t the same. Steve Small’s illustrations are full of humour but poignant too and Smiriti Hall’s rhyming text a delight to read aloud; this is a virtuoso portrayal of what friendship means.

Mouse in the House

‘Please remove the Mouse from the House’: the instructions could not be clearer, but mouse-catcher Mr Bosh and his assistant Mr Bumble make such a mess of it! Children will squeak with glee as My Bumble tries and fails to catch the mouse, each time more spectacularly than last. We know things won’t go well when he can’t avoid the mouse-traps he’s laid – the same traps the clever mouse has nimbly side-stepped – but everything really goes to pieces when Mr Bosh sends him out to bring back a cat … The scenes are increasingly outlandish and comical, perfectly represented in Russell Ayto’s bright, scratchy illustrations, and it all culminates in the biggest disaster you can contemplate. Stylish, irreverent, unruly fun for all!

This awesome, rawsome, rhyming picture book chomps through gender stereotypes with wit, vitality and a whole lot of dinosaur dynamism – it’s a cautionary tale with swashbuckling twists in its T. Rex tail. And the message? Boys – beware of mansplaining dinosaurs to girls. “Dinos are for boys,” claims Ed, Maisy’s less than enlightened brother as he refuses to share his toys with her. But Maisy knows that’s simply not true. And besides, she doesn’t even need Ed’s toys because she knows T. Rex’s sister, who’s big, bright and every bit as fierce as boy dinosaurs. “My dinosaurs are mean, for sure/And boy, oh boy, can these girls ROAR!” she asserts with convincing glee as Deborah Allwright’s pounce-off-the-page illustrations depict a range of rollicking, roaring, rock ‘n’ rolling dinosaurs in gargantuan glory. As Maisy’s passion gathers apace, so Ed asserts his expertise on the matter, resulting in an uproarious down-to-earth-with-a-bump ending, and an excellent final twist. For more books with girl-power take a look at Work It Girl - Inspiring and Informative Books on Feminism for All Ages

A Julia Eccleshare Pick of the Month August 2020 | Penny, the notorious dog-napper, has a host of dogs already but there is one very special dog she is determined to get her hands on. Quick, clever, a master of disguise and very good at problem solving, he is the dog she wants. And he is covered in spots so should be easy to find. Penny’s assistant Pat sets out to find the dog. Can the dog-nappers catch their prize or will they be outwitted by the super-smart dog? Emma Lazell’s energetic and vivid illustrations inject this simple story with great energy.

The Runaway Pea Washed Away

Who can resist a tale of freedom, adventure, the unexpected and new friends, especially when its hero is a pea! This new adventure for the star of bestseller The Runaway Pea starts in the washing up bowl but before long the runaway pea has been swept down the drain – does he mind the mess and slime? No! He’s having a wonderful time. Before long he’s helping out a spider struggling in the water and as the two career out of the drain and into a stream the spider repeatedly offers wise advice – the trusting, ever-optimistic pea sees everyone as a friend, and every situation as an opportunity. His joie de vivre is irresistible, and everyone will be cheering him on. There’s a final twist in the tale too, a glorious conclusion that sets up more adventures. This is one VIPea you really need to get to know!

Coronavirus: A Book for Children about Covid-19

With consultant Professor Graham Medley of the London School of Hygiene and Tropical Medicine as the adviser on this book you can use it in confidence that the information is relevant and correct.   The idea behind the book was the brainchild of the publisher Nosy Crow - to make something freely available to help children understand the current situation and to try to ease some of their concerns.  No-one has received any fees for this book.  Plus, using such a well-known illustrator as Axel Scheffler (recognised worldwide for the Gruffalo illustrations) makes the whole thing feel recognisable and familiar.  The book takes us through explaining what a virus is and how you might catch it – and what happens if you do catch it.  A fascinating fact gleaned on the way is that there are more different antibodies inside us now than the number of people in the world!  Everything is explained in simple terms so that young children can understand the way antibodies react to virus incursions.  The book goes on to explain why we need to take care, why a vaccine may take some considerable time to develop and why so many things are closed at the moment. It also tackles the issues of being at home all the time, lack of fun and activities – and how to share and how to talk to your grown up about worries.  Talking about ways to help is a very useful way forward – and also being kind to those you live with.   The book finishes on the very positive statement that ‘one day this strange time will be over – we did it together’ a vital message of hope.  There are also sections of information for children as well as for the parents, guardians and carers.  It was a brilliant idea to create this – and a very generous act to make it available free of charge – excellent call Nosy Crow!

Holly Sterling creates very recognizable, diverse characters and these are the perfect backdrop for this sensitively written guide which will be helpful in both home and school contexts. The situations depicted and described are recognisable and familiar to young readers. The body language is particularly well captured on the page which describes in child friendly terms what it feels like to be shy. The situations used as examples, in Poppy’s story attending a big occasion with her parents and in Matteo’s story attending a friend’s birthday party, are instantly familiar. What is shown and described is how a child might feel at first and how that might change during the event and how they can be supported to eventually enjoy the experience and learn strategies for dealing with new situations. The Story Words page is a simple glossary of words and expressions which really develop understanding. At the end of the book a Next Steps section with suggestions for activities and discussion will be very useful and the section where each story is summarised in four steps will be invaluable for modelling writing. The first of a must have series for the early years.

I Can Catch a Monster

Bethan Woollvin won the Macmillan Children’s Book Competition with her first book Little Red and has since produced some wonderfully engaging picture books all looking at elements of traditional fairy tales. I Can Catch a Monster is the story of Erik, Ivar and Bo who live in a land of forests and monsters.  Erik and Ivar set off to catch some monsters for themselves, leaving their sister Bo behind as she is ‘too small’. Bo knows she is smart and brave, so she sets off to hunt her own monster.   The monsters Bo meets are varied and include a Griffin, a Kraken and a dragon – but rather than fight them (as she knows her brothers will try) she learns something from each of them and becomes the centre of humanity in the book.  This picture book tells the story in a series of illustrations which give the impression of being made in old printmaking techniques using a limited palette of colours which emphasizes the bold, simple illustrations used throughout. As one might hope– Bo turns out to be bold, to have more understanding of the natural world – and to be a brave female role model for the readers.   This simple take on traditional quest tales will be a favourite – and provides a lovely counterpoint for the old tales with all their slaying and death! Bethan was once asked to describe her books in three words – she chose ‘bold, dark and sneaky’ *– this is most definitely all of those but also delightful and endearing – do read it! 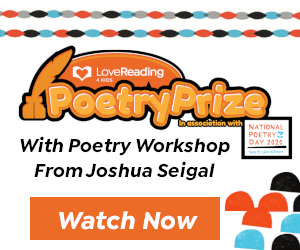